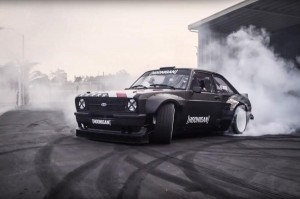 After decades of watching racing, custom builds, and the car community in general, we’ve come to a conclusion: it’s impossible to dislike Ken Block. How can you not love the guy? He drives on a level that’s biblical, races professionally and has become a worldwide phenomenon. And then there are the cars. They started off fairly tame and have now gone way off the end of the the acid trip scale. They’re amazing, and we’ve put them together here:

For most of us, this was our introduction to Kenny from the Block: his 2008 STI. Here’s a pretty useless sentence but, guess what, it had some work done. Race prepared by Crawford Performance, this ‘Rex is gutted, coming in 600 pounds lighter than stock, with 565 hp and 590 ft-lb. of torque going to all four wheels. That’s good for a 0-60 sprint in 3.0 seconds dead and 1/4 mile blitz of 10.8 seconds. Of course, those numbers are irrelevant. The ‘Rex barely, if ever, traveled in a straight line.

In the Bible of speed, let us now open our hymnals to the Ford era. After a few years with Subaru, Ken turned his attention to Detriot. Specifically, the Ford Motor Company. And with that decision, any semblance of sanity went out the window, to which we are eternally grateful. From 2010 to the current year, Block took the helm of various Fiesta’s. Pretty innocent cars, right? Turns out, not so much.

The latest example, dubbed the RX43, produces numbers that shouldn’t be real. From a two liter engine, this ST makes 600 horsepower. Let’s break that down: Six. Hundred. Horse. Power. Now, I know we’re all a bit jaded when it comes to performance, but this hatch is cranking 300 ponies per liter. To give some scale, if the Mustang GT made that ratio, tires would meet their maker thanks to 1,500 hp.

What happens when you drop 600 big ones in a Fiesta? Here’s the understatement of the year: it’s fast. Really fast. Un-freaking-belivably fast. Don’t even worry about 0-60, since you’ll barely have time to blink in the two (we’re seeing a theme here) seconds it takes. That’s one second longer than it takes an F/A-18 to reach 60 off of an aircraft carrier. Not surprisingly, it’s pretty good in competition, having spent time in Global Rallycross Championship, X Games Rallycross and FIA World Rallycross. Basically, it’s a LaFerrari that’ll go anywhere. The want is strong with this one.

At that point, we thought we were safe. “They’re basically just race cars,” we all thought. “That’s the end of the insanity.” The extent to which we were all wrong is hard to measure, because what came next isn’t possible to describe. It’s a 1965 Ford Mustang. Whatever the total opposite of stock is…that’s what this “Mustang” has become. We’re pretty confident the name “Ford Mustang” is all the Hoonicorn has in common with a 1965 Mustang.

A 600 hp 2.0L? That’s so played. How about EIGHT HUNDRED FORTY FIVE from a 410 cu.-in. V8. As a side effect, torque is up there with whatever powers the sun at 720 ft-lb. And just in case that’s not quite enough, that power goes to all. four. wheels. There aren’t enough four letter words in the universe to begin to convey the utter joy that the Hoonicorn delivers. Just look at it. Now try not to want it. Impossible.

Anytime a fully-built Escort RS seems sane…that’s pretty incredible. Of course, this being one of Ken Block’s cars, it isn’t exactly tame. This time around, it’s a 2.5L four banger dropping 333 hp at the rear wheels. Might sound minimal but a) remember that it’s not normal for a car to pack 845 and b) this ride was made specially for the next Gymkhana. What it lacks in sheer brute force, it more than makes up for with unflappable handling and desire to move sideways. We cannot wait to see this thing murder tires.

Looking for your own aftermarket fix? Stay tuned right here, because SEMA is just around the corner. Like Motorz on Facebook and follow us on Twitter for all of the latest news, highlights and recaps from the epic Las Vegas show.