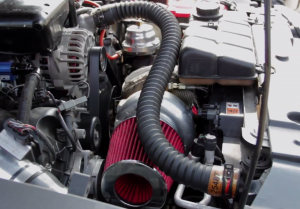 Deciding to turbocharge your vehicle, or significantly upgrade your already forced induction engine, is a major step. For most, the substantial horsepower gain is more than enough. However, if you’re interested in taking things a step further, ECU modification can provide a viable alternative to simply bolting on more hardware. Some of the most effective options are systems known as anti-lag.

The fundamental problem with turbochargers is turbo lag. Since a turbo runs off of pressure generated by exhaust gasses, when the throttle is closed, boost drops substantially. As a result, it takes time for this pressure to rebuild when the throttle is reapplied. This delay in performance is known as lag, an issue not encountered with normally aspirated engines. Depending on the size of the turbo, the length of the delay can vary.

Anti-lag systems (ALS) use precise engine tuning to counter or significantly reduce lag. Two approaches, bypass valves and ignition delay, are commonly used in ALS implementation. The bypass valve system operates by redirecting air around the engine when the throttle is closed. At the same time, fuel is dumped into the combustion chamber resulting in a high air-fuel mixture. When the unburned fuel interacts with the redirected air in the hot exhaust system, it combusts. This keeps the turbocharger at peak boost even when the throttle is closed.

The second approach, ignition delay, focuses specifically on the combustion process. Following the intake stroke, the piston moves up in the cylinder preparing for ignition. Rather than sparking at top dead center, as usual in combustion engines, ALS tells the ECU to wait to spark until the cylinder is at its lowest position possible without stalling the engine. This delay means that when the exhaust stroke begins, combustion is still underway. As a result, the air entering the exhaust system is extremely hot, providing continuous, peak boost to the turbocharger.

Both systems provide a key benefit: significantly reduced turbo lag. Additionally, you can expect your car to pop flames out of the exhaust and produce continuous bangs when off throttle. Both are normal, direct results of a now “after-burning” engine. However, fair warning, the side effects are noteworthy. Turbo temperature will rise dramatically, shortening the lifespan of the compressor. ALS also multiplies strain put on the exhaust manifold and sharply reduces engine braking.

In summary, anti-lag systems can be highly effective for track days cars and when you want the absolute maximum performance from your turbo. Just keep in mind that your regular maintenance costs can rise substantially and turbo lifespan may also drop off.

Unsure about what’s involved in turbos vs. superchargers? Check out the eHow Auto Center episode below to see Chris give a full overview of both!