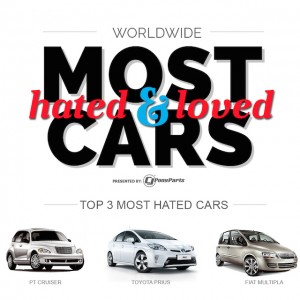 Have you ever been riding along when suddenly you catch a glimpse of a car you can’t stand? You may launch into a minor rant about how ugly the car is, not understanding why anyone would want it, or even fathoming why it was made.

Well, there are three cars that have inspired such rants far more than others across the United States – and in at least one case, around the world. This info was taken from a CJ Pony Parts survey of reddit.com/r/cars, a subreddit with over 139,500 subscribers. The information is pretty interesting. It’s no scientific study, as one would imagine there couldn’t be more than one person voting from Singapore or Faroe Islands, but the three most hated cars stand out far more than any others. Here they are: 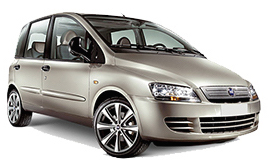 While the Fiat Multipla hasn’t offended the sensibility of too many Americans, when you leave the States you’ll find that this car is hated in Great Britain, Germany, France, Austria and Belgium, among others.

The most common complaint about the Multipla is that it’s either stupid looking or ugly. Visually speaking, you can see how it offends the eyes.

It’s a car that suffers from a designer not knowing that he had to choose between a boxy shape and a more smooth/curved shape. The car was meant to be a stylish compromise that didn’t impress. However, some drivers are able to look beyond the design to functionality. One person defended the car by saying that it was easy to drive, roomy and the insurance payments were cheap.

Such facts did little to dissuade a group of Multipla haters, who created a Facebook page for the sole purpose of expressing their outrage over the vehicle. 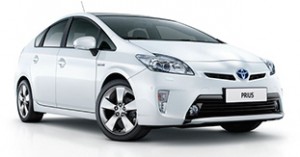 If the road to Hell is paved to with good intentions, than the Toyota Prius is apparently the car of choice for getting there.

The Prius is supposed to be an environmentally friendly car that cuts back on vehicular pollution. If that sounds like a good idea, it’s because it is a good idea. So why all the hate on this hybrid? Well, apparently one major reason has nothing to do with the Prius at all.

The poor Toyota Prius may have earned its bad rep thanks to the smug individuals who drive it. You know the type: The self-congratulatory individuals who go out of their way to let everyone know that they’re singlehandedly saving the planet. However, some research shows that the Prius may be worse for the environment than the big SUVs that these persons get so preachy about. So not only is it a bad hybrid, it’s often associated with annoying hypocrites. 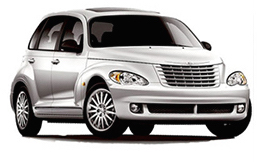 In a list of most hated cars in America, you will never fail to find this car near or at the top. This Chrysler vehicle is so loathed that the company discontinued it in 2010.

The strange part of this story is that the PT Cruiser was originally well received by the public. It came about during a time period when everyone was hating on gas-guzzling SUVs. The design was unique and it helped make Chrysler quite a bit of money.

A few years after it debuted, the general American public fell out of love with the Cruiser. Suddenly it was no longer sensible or fashionable to own the car, which was increasingly referred to as ugly. It also was found to be a gas-guzzler in disguise.

The PT Cruiser eventually became so disliked that it was nearly done away with multiple times before its ultimate demise. The reason it kept avoiding extinction? People continued to buy it.

By the time the PT Cruiser was done away with, it was the bane of practically every sensible driver’s existence. However, that didn’t stop a loyal few PT Cruiser fans from pondering just what was wrong with everyone else.

Today, the PT Cruiser can boast it is the most hated car in all of the United States. Of course, a car being hated has never stopped an individual from making the decision to buy and drive it. Which, of course, leads them to be side-eyed and judged ruthlessly by every other driver he or she obliviously passes on the road.

When it comes to car hatred, perhaps the big question is why we allow ourselves to be worked up into a mental tizzy over a car that many of us (thankfully) will never endure the embarrassment of owning.

On the other side of the poll, the most loved cars included cars by Lamborghini, Ferrari, BMW, Porsche, Audi, and McLaren. I’ll take one of each, please.