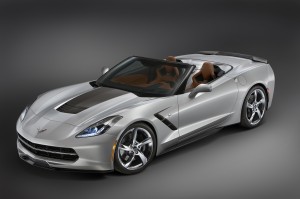 With the SEMA show getting tantalizingly close, even the major factory manufacturers are beginning to release the surprises they’ve spent months preparing. Chevy has shown off a wide variety of vehicles, most notably two Silverados modified to handle virtually any emergency. The bow tie now continues to showcase its aftermarket prowess with three incredible C7 Corvette Stingrays. 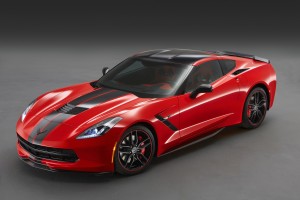 As if the ‘standard’ C7 won’t be enough for its lucky owners, Chevrolet has now shown the dramatic changes in character that can be made to the 2014 ‘Vette. First up is the Stingray Convertible Atlantic concept. Designed to carry the same kind of class as a private jet, a subtle body kit, grey-accented headlights and matte hood accents differentiate the Atlantic concept. In a very cool turn for SEMA, instead of waiting for an aftermarket company to produce such parts, many components on the Atlantic can be ordered from the Chevy accessories catalog.

To juxtapose the below-zero coolness of the Atlantic, a very different treatment is given to the literally red hot Stingray Pacific concept. With the incredibly sporty Z51 package, this emphasis on performance is also demonstrated with a carbon-fiber hood, roof and interior trim. Head inside and you’ll find competition seats and a flat bottomed steering-wheel. The seven-speed auto from the Atlantic is traded away for a manual ‘box in the Pacific.

Easily the most extreme of the three is the Stingray “Gran Turismo” concept. Very deep blue paint, vinyl graphics, yellow headlights and a full body kit adorn this homage to the Gran Turismo video game series. However, there’s nothing pretend about the race-spec seats, full racing harnesses and rear structural bracing. With the C7’s 460 horsepower V8 nestled behind the menacing front grille, this is one seriously mean ‘Vette.

Head to the SEMA official site to learn more about these incredible vehicles and much, much more! Stay up-to-date with Motorz by following us on Facebook and Twitter.