Finding a car cover is not particularly difficult. Numerous makers offer a wide variety of possibilities, which can make cutting through the clutter a challenge.  As we’ve discovered here on Motorz, when it comes to the highest quality possible, Covercraft stands on its own. Through our partnership with the highly respected manufacturer, you can win your own Covercraft car cover! Simply head to our Ridez page, submit a few photos of your ride, and you could be next month’s winner!

Finding the perfect combination of boulevard cruiser and full-on sports car is tricky at any price, particularly under six figures. This month’s Ridez winner, Mike Collins from Dayton, Ohio, has developed that exact package with stunning results. His 2008 Ford Mustang GT convertible started life as a capable top down muscle car and now has been taken to an entirely new level.

At first glance, the 20-inch Forgeline SP3 wheels, inspired by the ’08 Mustang featured on Motorz, hint at high performance. Tucked in behind the new metal, Baer six piston calipers rest on slotted and drilled rotors. Mike installed the brakes on his own after seeing Chris perform the same task in the Motorz  big brake kit episode. A far more aggressive stance, courtesy of Eibach pro-kit lowering springs, bring the center of gravity even lower.

As well executed as the exterior is, lifting the hood reveals even more potency. After seeing our Mustang supercharger episode, Mike decided to add forced induction via an Edelbrock E-force supercharger. Helping to transfer that new power to the ground, an MGW short throw shifter, GT500 front struts and adjustable panhard bar keep the transmission and suspension up to speed. Amplifying the V8’s already musical engine note, a Flowmaster axel-back exhaust removes any doubt of this Mustang’s top shelf performance.

Check out photos of this incredibly well built GT convertible in the gallery below. Ready to be featured here next month and take home a Covercraft car cover? Head to our official Ridez contest page and you could be next month’s winner! 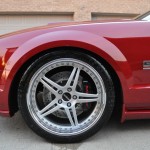 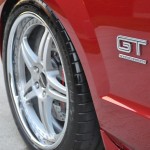 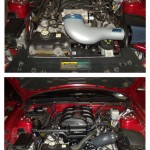 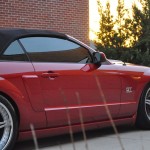 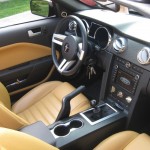 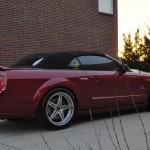 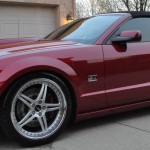 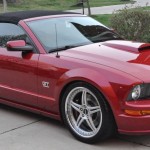