Mustangs are brisk from the factory but carry substantially more potential. Aftermarket tuning firms, especially those that attend SEMA, specialize at making quick cars fast enough to bend light. You can probably see where this is headed. Match up a legendary muscle car with sky’s-the-limit speed demons, and the result is right at home in Las Vegas. As we get ready for SEMA 2015, check out a few of our favorite pony show cars from over the years:

If you’re compiling a list of insane Mustangs, might as well start with the most maniacal of them all. Dubbed ‘Hoonicorn‘, the only stock component left on this ’65 coupe is the roof metal. So nothing. Instead, it’s a gutted, caged, widebody drift machine. Though a conversion to AWD might seem odd, it becomes easier to understand when the 410 cubic-inch V8 offends the laws of physics with 845 horsepower.

Incredibly, that’s naturally aspirated power. No turbos or superchargers here. By a very, very long way this is the most raw Mustang we’ve ever seen. If you haven’t witnessed it in Ken Block’s Gymkhana 7…well we’re not sure what you’ve been doing, but it’s a mandatory watch. 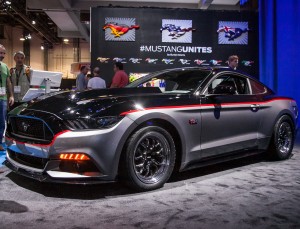 Plus, if we’re being honest, it’s shockingly good to look at. 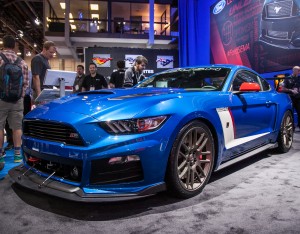 At first glance, this is one of those cars you expect to be tuned for the track. Factory engine, maybe an intake, but otherwise completely focused on agility. Not so much. Though the suspension is finely tuned, this Roush eye candy develops 777 horsepower (in Vegas. Seriously, does it get better?). From the power to the aesthetic approach and everything in-between, this remains one of our all-time favorite Mustang builds. Incredibly well done. 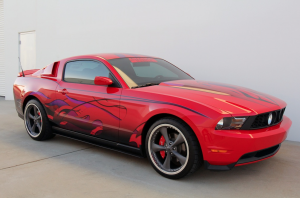 We’ll be honest, there was a zero percent chance of our own car missing the list. Built from the ground up, our project pony ran a ProCharger supercharger, Air Lift suspension, SSBC big brake kit, exterior accents, Katzkin interior and endlessly more. In case that wasn’t attention grabbing enough, we decided to go all-out with the sleek yet aggressive livery. Make sure to check out the full build list and related episodes for a complete rundown.

For the latest news and updates from SEMA 2015 and the auto industry in general, stay tuned to our Facebook and Twitter channels!