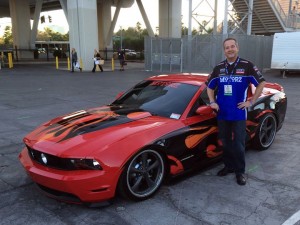 Four days. That’s what stands between us and the year’s greatest aftermarket trade show. Four. Days. The cliche is inevitable but true: our anticipation for SEMA 2015 is palpable. As exciting as the show previews we’ve received so far have been, it’s all of the planned Motorz action that has us packing our bags way early. Visiting the Nov. 3-6 show or tuning in elsewhere? Here’s what not to miss at SEMA 2015!

First up, make sure to drop by Covercraft. Beyond being one of our favorite partners, the Motorz project Jeep Wrangler will be showcased at their booth. You’ve seen the Wrangler in our latest Motorz episode, but we’ve made some substantial mods in the meantime. We do love a good hyperbole, but it’s hard to overstate: the difference is night and day. Trust us, you won’t want to miss this one.

For variety, a 2015 Mustang convertible, 2016 Chevy Colorado and Scion FR-S will also be in attendance alongside our Wrangler, and all four will be decked out in the latest and greatest Covercraft gear.

Over at the Shell Live Stage, located right outside Central Hall (the main entrance), Motorz co-host Alan Taylor will be hosting a ton of auto industry leaders and celebrities. The full list hasn’t been revealed yet, so stay tuned for more info in the near future. Some say our very own Chris Duke may be making a special celebrity appearance….

Can’t make it to Vegas in person? Not a problem. Live video streams, interviews, podcasts and more will be available. For the latest, follow the hashtag #ShellSEMA2015 on Facebook and Twitter.

Best of all: we’re filming an all-new Motorz episode directly from the show floor! Chris will be interviewing leaders in the industry, key attendees and show partners throughout Las Vegas Convention Center. That’s a big change from last year, when interviews were conducted solely in one location. If you see Chris during the show, be sure to stop and say hi!

Exciting as that all sounds, some of the best Motorz announcements and show activity will stay under wraps for just a few more days. Check back here regularly and visit our Facebook and Twitter channels for Motorz updates and all SEMA 2015 breaking news. It’s almost time!