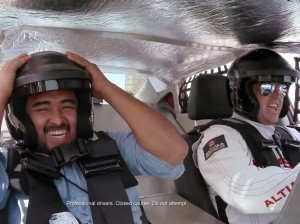 Videos that gain millions of hits seem to constantly find their way to YouTube fame. However, the ones with the cars as the stars seem to set the bar that much higher. This week’s collection of three particularly entertaining hits certainly crosses a variety of spectrums. From Godzilla chowing on Fiat hatchbacks to Nissan tricking random participants with fake race cars, it is all here and more.

Who doesn’t like a blockbuster action movie starring a massive lizard that devours a city? Fiat played off of the new Godzilla with an ad that features our favorite nuclear-test-gone-wrong reptile and a few 500’s that were in the wrong place at a very wrong time. The visual effects of the ad are incredible with an equally enjoyable sense of humor from the company towards the end of the video. It is hard not to get a kick out of this production.

Moving back to reality for a moment, we all know motorsports are dangerous. That is especially true when it comes to NHRA Top Fuel drag racing. These rail cars are not powered by engines so much as barely controlled explosions. With thousands of horsepower and 0-60 times that rival aircraft carrier catapults, there is very little time to react when things go wrong. Antron Brown found that out the hard way when his engine literally exploded after his run at the Summit Racing Equipment NHRA Southern Nationals. Amazingly, not only was Brown uninjured, he actually walked away unharmed from the accident. Needless to say, it goes to show the incredibly safety systems incorporated into top-level dragsters.

We’ve seen what happens with full-on dragsters. Yet, what occurs when you fool people into thinking they are in an actual race car? Nissan did exactly that. To showcase how exciting the new Altima can be when pushed to its limits on a closed course, they took bone stock examples and dressed them up with fake body elements and covered up interiors. After taking passengers on several hot laps, pit crews then removed all of the added elements to reveal the “race cars” were actually standard Altima models. The reaction of the participants is something incredibly entertaining to watch.