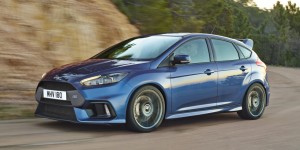 It’s finally happening. After a long, long wait, U.S. auto journalists are getting a crack at the America-bound Focus RS. Ford’s performance division has been on fire lately, with the GT350, GT350R and GT dropping jaws worldwide. Special as those beasts are, at least on this side of the Atlantic, perhaps none are more highly anticipated than the RS. Now that the first test drives and initial reviews are coming in, does the hottest Focus ever deserve the prolific build up? Let’s find out… 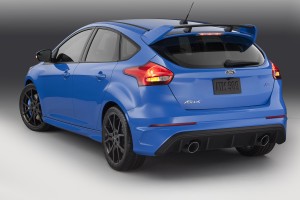 Might as well get this out of the way: the RS is stupid, stupid fast. Thanks to what we can only assume is black magic inside the 2.3L four banger, this $36k hatch hands 350 hp and 350 ft-lb. torque to all four wheels. That’s good for 0-60 in 4.7 seconds. To give some perspective, the Mustang GT 5.0 does the same in 4.3, but with nearly 100 more ponies at work. The RS is fast in a way that it shouldn’t be, and without the massive turbo drama you’d expect. That’s either a plus or minus depending on your perspective, but no matter what, it’s blisteringly quick.

In case that’s not quite impressive enough, the 1/4-mile is all over in 13.2 seconds. That’s seriously brisk for anything on four wheels. The discrepancy between a decent 0-60 and insane 1/4-mile time suggests some initial turbo lag, followed by a pull that doesn’t let up. Certainly understandable for an engine pushing boost upwards of 23 psi. Yes, it’s the same engine as the Mustang EcoBoost. No, it doesn’t feel anything like it. 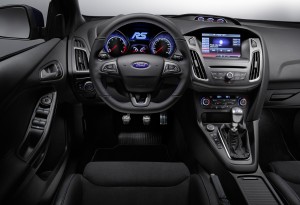 If you’ve driven an ST, this is familiar territory. A surprising amount of the running gear carries over, with some higher-strength components ready to handle the increased power. It’s a solid transmission. Nothing much to write home about but no complaints, either. More than ready to do the job.

One of the more attractive elements of the ST is the unexpectedly nice cockpit. The RS continues that trend but dials it up further. Absolutely gorgeous Recaro seats keep driver and passenger firmly in place. Yeah yeah, the ST technically has Recaro seats too, but the RS has the actual hardware you think of when you hear Recaro. If the car Gods smile upon us, we may even see these gems travel across the pond.

Other than new chairs, it’s the same story as the transmission. Upgraded slightly, but if you’ve spent any quality time in an ST, the song remains the same. 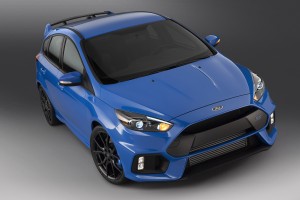 In the right color, the ST is an attractive hatchback. With the RS, the Focus moves from good-looking to downright desirable. Best looking hatch ever? That’s up for debate but surely the WRX STI five door must be in the conversation. Thanks to an aggressive yet tasteful body kit, the RS finds itself fighting for that honor as well. If you like the ST, you’ll love the RS. Starting to see a pattern here? Basically the same as the ST but a little better? That’s all about to go away…

The ST is amusing. Sure, getting a FWD car to oversteer is entertaining for a bit, but eventually becomes a one trick pony. That’s where the RS transforms the entire experience. It still loves to oversteer but is endlessly more adjustable. Treat it gently and the RS is fairly neutral. Put it into drift mode and the car forgets about sending power to the front wheels for a few seconds. Instead of feeling limited, it feels like a legitimate track weapon. No lap times have shown up yet, but we expect them to be among the all-time best for a car in this price range. 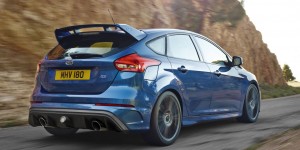 In ways that don’t matter very much, the RS feels like a pumped-up ST. When it comes to the parts that do, such as the engine and suspension, it’s a completely different animal. If the ST is a strong 7/10, the RS hammers home an absolute 10/10 and then some. This is the real deal. After months of the internet collectively losing its mind with anticipation, initial reactions indicate the hype was legitimate. Impossible as the task at hand was, Ford has more than delivered on its promises. If you’re looking to remove $36k from your bank account, there’s a new best way to do so. It’s insane, it’s ridiculous and we’re completely in love. Bravo Ford. Bravo.

What are your thoughts on the first ever U.S.-bound RS model? Let us know on Facebook and Twitter!