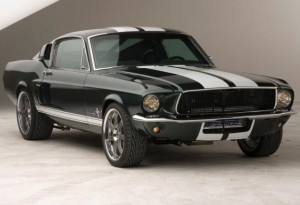 One of the best things about the Fast and the Furious films is the mixture of vehicles. Granted, the majority typically are Japanese Domestic Market (JDM) but more than a few muscle cars tend to make their way into each part of the series. The first film had a ’69 Charger to die for and the second film upped the anti with a clean Challenger and Yenko Camaro. Somehow, despite being set in Tokyo, the third film kept the trend alive and well. Here are a few of our favorites from the JDM vs. USDM flick:

Or rather, Monte Carlo from hell. Whatever is under the hood of this primeval beast waved bye-bye to stock a long time ago. Not many cars can keep up with a factory-fresh SRT10 Viper, and a severely worn Chevy family hauler isn’t on the list. However, in one of the most literal cases of ‘don’t judge a book by its cover,’ we get a good look at what happens when the right mechanic is at the helm. Even if you hate the F&F films, it’s pretty much impossible to not like this housing development street race.

Except maybe the wanton destruction of property, dozens of pretty serious laws broken, insane risk to life and limb and a few other less-than-brilliant maneuvers. Kids: this is why man invented drag strips.

We all have those buddies who like to tell us how easy performance driving is, how it just comes so naturally. One of the top skills that is talked up without backing is drifting. It’s an unbelievably difficult skill to master, requiring zen-like car feel and touch that is highly challenging to teach. Yet, you’ve probably heard stories of someone proclaiming their sideways skills.

Here’s a nice example of what happens when talk meets action and the two don’t necessarily align. Or even come close, as with most cases. Next time your buddy starts up about how good he is at getting the tail out, just go ahead and pull up this clip. Put briefly: it’s everything not to do behind the wheel of a car, especially a fully built race machine. For the record, drifting: not easy.

Regardless of whether you’re all about JDM or USDM, this Mustang is a thing to behold. What do you do when your S15 was annihilated, your classic Shelby Mustang has no drivetrain and you need to beat the Justin Timberlake of Japan? Hello insane-but-wonderful engine swap. Dropping a turbo four out of an S15 Silvia into a Shelby is one thing. But that’s not what happened here. Instead, the S15 had actually been swapped with a twin-turbo inline 6 from a Nissan GT-R34. Sounds a little crazy but there is some method to the madness.

The Mustang provides a stripped body, tons of space to work and flexibility when it comes to setup. The R34 powerplant (the RB26DETT for you Skyline fanatics) is happy to rev all day, spools up fairly quickly and has no problem delivering massive power levels. Big power + RWD + gutted car = drift nirvanna. It’s also a nice way to stylishly beat a guy (who apparently is incapable of wearing sleeves) in his uncle’s 350Z.