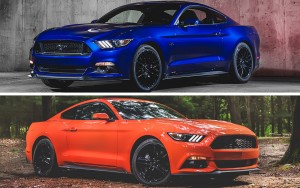 If you’re in the market for a new muscle car, chances are the Ford Mustang is at the top of your list. However, there is a slight problem. With the latest generation, Ford introduced a new type of pony car to the mix. Beyond the V6 and V8, the Mustang can now be ordered with an EcoBoost I-4 turbocharged engine. Is the new turbo four worth considering over the classic V8? We decided to find out.

Choosing between the two is not as simple as it seems. Although the 5.0L V8 certainly produces more power than the 2.3L I-4, the results are closer than expected. Sprinting from a standstill to 60 mph, the GT needs a total of 4.5 seconds. The EcoBoost, at 5.2 seconds, is just a tick behind. Not bad, especially considering the 310 hp of the I-4 is well off the V8’s massive 435 hp. Torque is similarly spaced, at 320 lb. -ft. versus 400 lb. -ft.

While runs to highway speed limits are surprisingly close, the power difference does come into play around a track. The GT will consistently lap quicker, hit the 1/4 mile marker nearly a second sooner and go all the way to 164 mph. That’s a full 15 mph faster than the V-Max of the EcoBoost. It’s also worth noting that the naturally aspirated V8 is more responsive than the turbo four. Additionally, the GT can be spec’d with optional performance packages not available to the EcoBoost.

If you badly want the GT but are trying to keep the sticker away from “could have this or a Corvette” territory, there are only two options you really need: the outstanding Recaro seats and GT performance package. Combined, they add about $5,000 to the list price. For what you get, including comprehensive brake and suspension upgrades, it’s actually quite a bargain. Check both boxes and you’re set.

However, that’s far from the end of the story. While the GT is unquestionably the faster horse, the four cylinder is the more efficient daily driver. The 15 city/25 highway mpg of the V8 is reasonable, but the I-4’s 21 city/32 highway can make a substantial difference over time. Plus, you’ll save over $5,700 by choosing fewer cylinders.

Which is best? That ultimately comes down to what you’re looking for from your Mustang. Have a daily commute that typically involves stop-and-go traffic? The impressive mpg’s of the EcoBoost and unexpectedly brisk pace are likely the go-to option. Should fuel economy fall second to sheer performance on your list of essentials, the pure, brutal, where-has-this-been-all-my-life power of the V8 will win a spot in your driveway.

Our dream 2015 pony? Take the base GT in dark green/Guard (because Steve McQueen), add in the Recaro seat and GT performance packages and that’s it. In all, you’re looking at $37,215, not bad for an incredibly good looking 435 hp V8.

Whether you go for the EcoBoost or GT, thanks to what is already defining itself as the greatest Mustang lineup ever, you can’t go wrong.