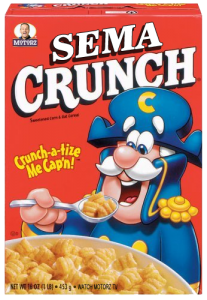 The final countdown to the 2011 SEMA Show in Las Vegas has begun. Many of us call it “the SEMA crunch” and even in our world, 7 days is still a lot of time.

You have witnessed that automotive miracles can happen in as many days or less on popular shows such as “Overhaulin'” led by Chip Foose. It’s a crazy time, indeed, as many SEMA project vehicles are finalized this week–many in the hours before they’re packed up and put on trailers (and some, as we’ve personally witnessed, are finished after they’re parked at the Las Vegas Convention center!)

In celebration of The Crunch, we are reliving special Motorz Moments from our past.

To kick off our 7-day countdown to the biggest automotive show in the universe, we present a blast from our past…

Check back tomorrow for more!

Chris Duke and the entire Motorz Crew will be at the show again this year. Look for them and be sure to stop ’em and say Hi!

To watch the full episode which includes this segment, see “2010 SEMA Show Coverage“.