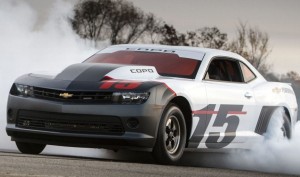 The 2015 Mustang, Challenger and Camaro came out and grabbed your attention. You headed to your local dealerships, took a test drive and were pretty happy, but wanted a little more. Ok, a lot more. As in, I’d prefer this to be faster, lighter and louder than technically street legal, more. Worry no longer, because the Bow Tie, Blue Oval and Dodge Bros. have introduced a few insane NHRA-spec factory drag racers. Get the checkbook ready for the COPO Camaro, Challenger Drag Pak and Mustang Cobra Jet. 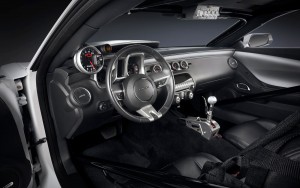 Central Office Production Order. Though the acronym may be remarkably dry, COPO is a magical term. Since 1969, Chevy has been releasing limited-quantity, drag strip ready production cars. Taken off of the assembly line as a body-in-white, these racers are prepared by Chevy to do one thing: annihilate the 1/4 mile. For 2015, the COPO Camaro has returned, and it’s as maniacal as ever. Available with a variety of LS engines, it can be had with up to 530 hp when ordered with a 5.7L supercharged 350. Not bad, especially when in completely-gutted Camaro form.

Beyond the engine, COPO modifications are genuinely too numerous to list. Highlights include a full chrome-moly cage, G-Force 4-speed manual (or Hurst Quickstick 3-speed auto), Callies “Dragonslayer” crankshaft, solid rear axle and much, much more. Though only 69 complete cars were initially offered, you can build your own via the Chevy parts catalog.

If the standard Camaro is a little on the mean side, the COPO wants to do a burnout on your mother-in-law. Sort of what you expect from a car with a crankshaft called Dragonslayer. Needless to say, we want one. Badly. 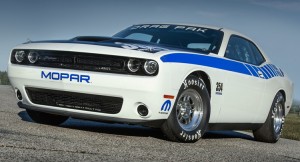 Hellcat not quite doing it for you? Challenger Drag Pak to the rescue. Like the COPO, the Drag Pak is pulled directly off of the assembly line and hand built by Dodge. This time around it’s packing a 354 cubic-inch HEMI V8 with cast iron block, Mopar camshaft, forged steel crankshaft and high-performance engine management software. Moving aft, the interior is equally ready for the drag strip, featuring five point harnesses, full cage, Mopar gauge pack and more. And in case anyone likes to measure, those Hoosier drag radials are a tarmac-shredding 15-inches.

One slight downside: it’s not exactly what you’d call cheap. Get reach to scratch a check for $109,354 for the top spec. Might seem excessive, but considering all the hugely labor intensive prep that’s already done, it’s actually a pretty solid deal. 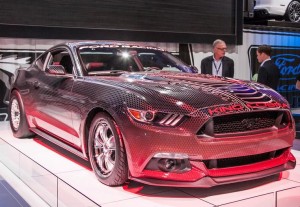 When it comes to sheer lunacy, it’s hard to look past Ford’s approach. Unveiled at SEMA, everything about this ultimate Mustang is jaw-dropping. From the snake skin paint to sub-11 second 1/4 mile times, the King Cobra announced its arrival in a big way. You might be thinking around the 11-second mark is a little gun-shy compared to the COPO and Drag Pak. There’s a reason: you can drive this animal on the street. That’s right. This 600+hp, 10.97 second 1/4 mile maniac is grocery getter (kinda sorta maybe). Though the pictured car was a SEMA special, everything on it can be ordered directly from Ford.

Simply spec the Drag Pack, Handling Pack and beautifully named Super Pack. The latter dropping in a 2.3L Roush supercharger, which makes super a bit of an understatement.

Which is best out of the three? It depends on your brand preference, what kind of performance you need and if streetability is a concern. No matter which direction you lean towards, this is a three-lane drag strip match just waiting to happen.

Which of these three ultimate factory dragsters would find a home in your garage? Let us know on our Facebook and Twitter pages!