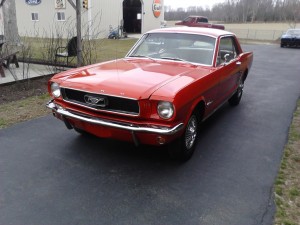 In the most recent Motorz episodes, Chris demonstrated how to install a wide variety of aesthetic and performance upgrades. Needless to say, by the time we were done with our Mustang, it was a seriously well-prepared machine with enormous capabilities. Whether your ride is a similarly modified project car or a stock but cared for daily driver, you would not settle for inferior running gear. The same applies to the best protection you can get for your car when it is sitting still: a Covercraft car cover. Feel like winning your own? Head over to the Motorz Ridez page, submit a few photos of your own vehicle and you could be next month’s winner!

The only thing better than having a dream car is an incredible story to go along with it.  This month’s winner, David Garron from Bridgeton NJ, has both in spades. His beautifully clean 1966 Ford Mustang is about as cherry as a car can get. He has owned the car since 1997 but due to other commitments had not been able to work on it since that time. That all changed when his mother-in-law was diagnosed with cancer. Her dream had been to drive a classic red Mustang and thanks to David it was not long before it became reality. Working day and night on the car, he was able to perform a rather incredible restoration. The interior features all new parchment coloring, steering wheel, door seals and more. Under the hood he went with a rebuilt carb and much needed all-around engine tune. His mother-in-law did pass away but not before she was literally able to live her dream. Check out the photos below to see this dream-come-true as it was the first time she saw it, sat in it and took it for a spin. Talk about a drive to remember.

Feel like being featured on Motorz next month? Head to the Ridez page, send us a couple photos of your ride and you could take home your very own Covercraft car cover! 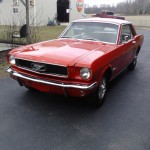 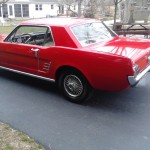 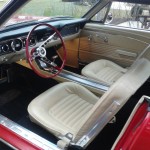 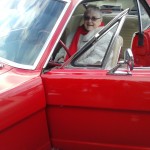