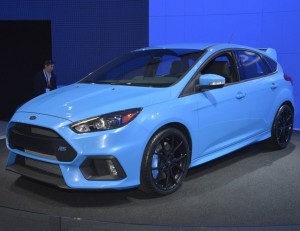 Might as well cut to the chase: the new Focus RS is stupid fast. We all knew it would be quick. Rumors of around 315 horsepower and five second 0-60 runs got everybody excited. But none of us were bold enough to expect the RS to be quite as insane as it is. Insane being defined as 345 ponies, 325 lb-ft. torque and 60 mph in 4.7 seconds. For anything on four wheels that’s pretty brisk, but how does it stand up to other budget-friendly ballistic missiles? Time to find out. 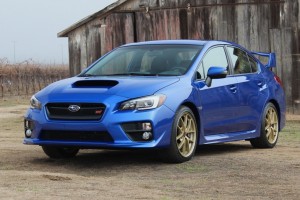 This is probably one of the first, most obvious comparisons to draw. With the Evo dead (insert tear), the RS may turn out to be its closest replacement. So can it hold a candle to STI performance? Actually, it does a lot better than just compare. In fact, it’s difficult to find an area where the STI holds its own. The RS has 40 more horsepower and 35 lb-ft. torque more grunt. In a race to 60, that means the RS hits the line in 4.7 vs. 4.8 seconds. Virtually a dead heat, but we’re guessing things won’t be so close when the quarter-mile times come out.

Pricewise it’s even all around, with the RS only about a thousand more than a base STI. However, the RS comes as a very welcome hatch, while for reasons we remain unsure of, the Rex only comes with four doors. Even for WRX faithful, it’s difficult not to give the edge to the latest hot Ford. Perhaps the 2017 STI has something waiting, but in the meantime, the RS takes this one home. 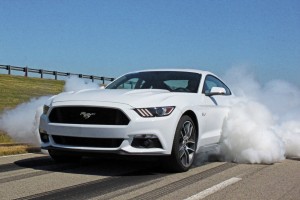 Admittedly, these two probably aren’t going to be cross-shopped, but the comparison is too fun to avoid. This time around, the Focus is the lightweight, bringing its 345 hp knife to the Mustang’s 435 hp gunfight. Even with AWD, that’s a little too much for the RS to overcome, ultimately arriving a tenth behind the pony to sixty. That’s pretty impressive considering it’s basically 100 hp down. Plus, and it’s a big plus, the Focus brings four doors and a hatch to the party. Though the GT has back seats, they’re roughly as functional as those in a 911. So not at all.

Curiously, the Mustang is actually more affordable, at $32,925 base. Add a few options and you’ll be over $40k quickly, but be careful and you can get a solid 5.0 V8 for the price of the Focus’ 2.3L four-banger. Which is best? It’s practicality vs. raw performance and summer marauder vs. all-weather rally car. In other words, sounds like test drives we need to take… 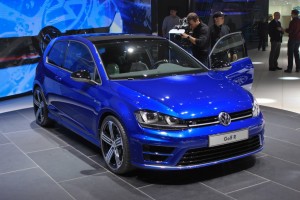 The latest Golf R doesn’t always seem to have the respect it deserves. Because if we’re being honest, it’s blisteringly quick. The 2.0L turbo four may only produce 292 hp, but somehow it crushes 60 mph in 4.5 seconds. At the quarter mile, it’s only two tenths off of the Mustang GT, which has a staggering 53 horsepower advantage. That’s mostly thanks to a DSG transmission that genuinely shifts faster than you can blink. Better yet, it’s not badly priced, with a $37,415 base.

Is there hope for the RS? You bet. Though the Golf R is kidney-hurting quick, it never seems to feel that fast. Plus, on back roads it lacks some of the playfulness of the STI, which likely will be the same story with the hottest Focus. If you want pure speed period, the Golf R is the way. For us, and we’re guessing STI (and soon to be RS) drivers, it’s just a touch too serious. 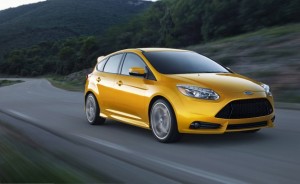 At this point, some may be thinking about grabbing the ST instead. It’s cheaper (over $10 grand so), also has five doors and is universally praised for how well it drives. All good points. The RS just offers so, so much more. To begin with, it’s AWD, which is better in any situation. We promise. Plus, it’s eons faster. Nearly a 100 hp advantage means the RS can give the ST a 1.6 second head start and still tie a 0-60 race. It also looks endlessly better, will be an absolute animal (in a good way) around a track and has a drift mode. That bears repeating: It. Has. A. Drift. Mode. In a four wheel drive hatch. Looks like God is real after all, and he likes hooning.

All of these comparisons are somewhat null until the actual production RS models hit the streets. But even before that happy, glorious, will-tell-the-grandkids-about-it day, it’s more than ready for its fastest rivals. The Evo is dead. Long live the RS.

Have your own head-to-head comparisons you’re looking forward to? Let us know on our Facebook and Twitter pages.