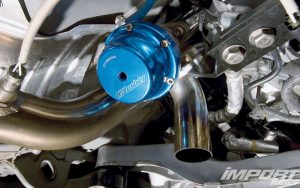 When it comes to turbocharging, wastegates fall into that category of “everybody has heard of them, but few can accurately explain them.” In fact, wastegates are simple components that play a critical role in controlling boost levels. Just how good are OEM wastegates, what’s the difference between internal and external, and when is it time to upgrade? Time for wastegates 101.

First up, wastegates are remarkably simple. Since turbochargers run off of exhaust gases, there needs to be a way of controlling how much gas is allowed into the turbo. Throw in too much, the PSI can exceed safe levels, cause turbo overheating, engine damage and a host of other day-ruining side effects. A wastegate simply regulates that build up of PSI. Once the limit (for example, 15 PSI) is reached, the pressure within the system allows the wastegate to open and unnecessary exhaust gases to be rerouted either straight back to the exhaust or into the atmosphere.

Simple, right? That brings us to item number two: internal vs. external. An internal wastegate is an actuator that, at a determined PSI, opens a bypass valve located inside the turbo housing. Benefits? It’s compact, requires minimal piping and since it reroutes unneeded gases back through the exhaust, is what you’ll find in virtually all OEM applications. It’s a common stock solution found on turbo cars right out of the box.

External wastegates are a slightly different animal. The idea is the same, but instead of triggering a bypass value inside the turbo, an external wastegate is an entirely separate actuator. This allows exhaust gases to be either a) injected further down the exhaust system, which increases turbo efficiency or b) vented directly into the atmosphere. In virtually every performance related way, external wastegates are preferable to internal units.

Of course, there are some tradeoffs for the increased performance. Namely, a significantly louder car. If you’re like us, that settles nicely into the “benefits” column. However, if you’re not a fan of particularly loud cars, you’ll want to avoid an external wastegate that vents directly out into the atmosphere. For those like us, who smile at the notion of a louder turbo, it’s a non-issue.

And, as a reward for now being a wastegate connoisseur, here are some lovely wastegate sounds: