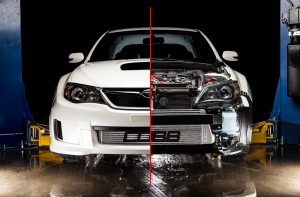 There are few things that deliver the fear and respect demanded by massive front mount intercoolers. Even if you have no idea what’s going on under the hood, one thing is clear: it’s definitely not stock and probably is ready to take on whatever you’re driving. But here’s the real question: as much attention as front mounts get, is there a clear advantage over top mounts? More importantly, is it the right move for your boosted car? Let’s dive into it…

The vast majority of boosted factory cars do not feature front mount intercoolers. Why? They’re simply not necessary. For the most part, stock turbos (especially new twin-scroll units) are realitively small. Thus, they require less air flow to reach peak PSI levels. With that in mind, placing intercoolers on top of the engine (read: WRX) makes sense. Plus, there are considerable advantages to top mounts.

First up, since minimal piping is required to reach the turbo, there is minimal turbo lag. Additionally, since it’s nowhere near the radiator, it doesn’t inhibit engine cooling. On the flip side, top mounts are vulnerable to heat soak. Turns out plopping an intercooler on top of an engine exposes it to some pretty phenomenal heat, limiting the density of the air being sucked in. This leads to heat soak, the simple way of referring to a turbocharger overheating and not operating at peak performance levels. Not exactly ideal for lengthy track sessions.

That’s where front mount intercoolers come into play. Since they have direct access to fresh air and a large surface area, all the air the turbo needs is readily available. That’s especially true for larger turbos, which need as much cold air as can be sucked in. Yet, unlike the fairly minor complications of top mounts, front mounts carry more serious implications.

Since you’re having to use significantly more piping to get to the turbo (unless you’re doing something like a front mount turbo), lag is increased. More critically, since the intercooler now sits in front of the radiator, overall engine cooling is reduced, increasing the chance of overheating. Additionally, since you’re dropping considerable weight ahead of the front axles, some handling is compromised.

So, which do we recommend? It comes down to your build progress and end goals. For the vast majority of bolt-on builds that use the factory turbo, a front mount probably isn’t required. They look amazing but can do more harm than good if unnecessary. Conversely, if you’re going for a big power, large turbo build, especially for drag racing applications, the front mount may very likely be essential. Visit the forums related to your vehicle and check in with people building cars along the lines of what you have in mind. Odds are, it’ll quickly be clear which solution is best suited for your car.