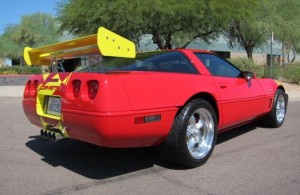 It’s probably not hard to figure out that we’re fans of The Fast and the Furious films. Some cool cars, great driving scenes and solid action. The key word being some cool cars. Though the storylines and dialogue are timeless, more than a few of the featured car modifications are well past their expiration date. Yet, on virtually any drive, you don’t need to look far to see some of these “upgrades” alive and well. Let’s stop the madness. Here are seven trends that are ready to move on:

Here’s our first question: when was this ever cool? Fake badges will elicit one of two reactions: either apathy or disdain. People who don’t know much about cars won’t care. The people that do will know the difference and, once they’re done rolling their eyes, will probably post it to Facebook with a funny (but not exactly complimentary) caption. Where is the upside? Yet, fake AMGs, Ms, Type Rs and GT500s seem to be almost as common as the real thing.

The cure? If you really want your model to be unknown, debadge the car. If you already have the performance model and debadge it anyway, that’s even better. A GT500 Super Snake running around completely under the radar is Mr. Freeze-drinking-a-slurpee-too-fast levels of cool. Either way, please stop throwing on fake badges. On behalf of owners of the real article, your friends, anyone who drives a car and all of humanity, we thank you.

Ah yes, the mother of unnecessary modifications. The number of cars that legitimately need hood scoops can pretty much be counted on one hand. Have a WRX? All good, the intercooler positioning requires you have a scoop. As for a ’97 Civic? Unless you’ve done some pretty incredible stuff under the hood…not so much. Wanting to make your car look faster is perfectly understandable. But for not that much more money, you can actually make it faster. Or, at the very least, not draw quite as much attention from your town’s finest.

This one is even worse than fake intakes. It’s the grand daddy of poor taste. At least with useless scoops some can argue aesthetic benefit. This one just shows the world how much you shouldn’t be taken seriously. It’s actually pretty simple: if you have a turbo, you need an intercooler. If you’re naturally aspirated, you incredibly don’t. Save the time, money and what must be endlessly awkward questions at car meets. Best leave this temptation alone.

Have a Lamborghini? Take all the vertical doors you want, it would be wrong to have one without. In fact, we’re even fans of Gallardo’s that have them installed aftermarket. However, and this is a big however, there’s a reason they’re nicknamed Lamborghini doors. It’s because they look awesome on Lamborghini’s. Coincidentally, it’s also the reason they look that bad on your buddy’s Celica. We can’t lie, these once looked very cool on just about everything in 1995. Alas, that was many, many moons and suns ago. Trends have moved on, cars have changed and it’s time for scissor doors to go the way of the dinosaurs.

Unless you’re a designer a Lamborghini. In which case, carry on.

We named this one really creatively, since it’s where the worst-of-the-worst exhaust systems belong. Don’t get us wrong, we love a loud exhaust. Getting woken up by a ZR1 with straight pipes is genuine music to our ears. Hearing a Corolla from six counties away thanks to a drilled muffler elicits a different reaction. Making your car louder and making it sound better are two very different things. Not sure which is which? If the development of your exhaust system involved performance tuning, legitimate horsepower gains and as a result fuller, louder tone: we applaud thee. If it involved a hacksaw and another hacksaw, it’s probably not awesome.

Invest that much more. Get a quality system. Everyone, everywhere will be happier for it. Trust us, we asked.

Wanting brighter, more effective headlights is certainly legitimate. Solving the problem by dropping in a cheap HID kit is not. If they’re not properly aligned (which 99% of the time they won’t be), all you’re going to light up is the enraged face of the oncoming motorist who no longer has corneas. HID headlights can be effective and look good, just make sure to have them competently installed and aimed.

Highly modified performance cars will generally run with substantially wider tires than stock. Such an offset may require wider fenders, giving the sleek lines of a well crafted body kit. Even those that aren’t completely necessary but look phenomenal (Liberty Walk, Rocket Bunny, etc.) get a pass. It’s the cars running stock ride height, with thin factory tires, and an extra 8″ of space on either side that boggle the imagination. Like a few other things in life, it’s an order thing. Worry about the suspension, tires and wheels first. Once they’re waiting at the shop, it may be time to bolt on that dream kit. Otherwise, to quote Mr. Kenobi, these aren’t the fender gaps you’re looking for.

Title photo thanks to CorvettesOnline.com