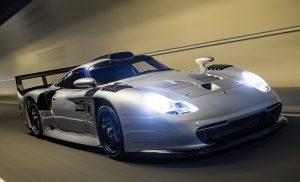 This past weekend, Ford made history the same way it did in 1966: beating Ferrari at its own game. As an opening salvo in the all-new Ford GT’s introduction, the race version managed to take home top honors in the GTE category, the highest class of (remotely) production-car based racers. It’s a remarkable achievement, and incredibly cool to think that street going versions will soon be roaming the streets. Yet, when it comes to truly homologated race cars, one will always be slightly more hardcore than the rest….

Our story begins in 1996. The BPR Global GT Series (which would eventually become the FIA GT Championship) had a habit of producing drool-worthy race machines. Known especially for the GT1 class, cars included the likes of the Ferrari F40 GTE II, McLaren F1 GTR, Mercedes-Benz CLK GTR and so on. By the time ’96 around, one of the biggest names in the business was ready to make an impact: Porsche. 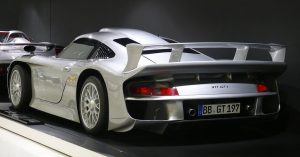 Given the strength of the competition, a truly special car was needed. And boy, did Stuttgart deliver. Though it was named the 911 GT1, this ultra purpose-built racer had roughly as much in common with a base 911 as does your living room sofa. Nothing at all. Instead, the bespoke chassis and 3.6L twin-turbo flat six were made to do one thing and one thing only: exert their will on racetracks across the globe. However, there was just one problem: since the 911 GT1 was as closely related to a road-going 911 as I am, it didn’t pass series homologation rules, which required at least 25 production, road legal versions.

Enter the 911 GT1 Straßenversion (Street Version).  Unlike virtually all of its competitors, which took road cars and modified them for racing, Porsche’s approach was the complete opposite. Build a ground-up race car, and slightly detune it for road use. You probably can see where this is headed: the Straßenversion was, and still is, simply the most hardcore supercar ever made. To change it from race spec (and make it road legal), all Porsche did was barely detune the engine, give marginally softer suspension, more traditional steel brakes and different gearing. Everything else was 100 percent, pure, unfiltered race machine. 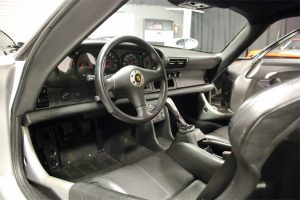 All of which helps to explain the GT1’s diabolically fast performance figures. All 537 hp moved the 2,535 lb. monster from 0-62 mph in 3.9 seconds and a top speed of 191 mph. That’s blistering for today, let alone twenty years ago. Plus, unlike the infamous “doctor killer” or “widow maker” 911 Turbo, the 911 GT1’s performance was accessible, not terrifying. Boost kicked in at 4,000 rpm, but in a way that worked with the rear tires to maintain grip and ferocious cornering speeds. Not look for meaningful and interesting ways to kill the driver, like the early 911 Turbos.

Two cars were made initially, with a total of (allegedly) 25 examples ultimately produced. A grand total of one found its way over to the United States. As a result, prices are as extreme as the car’s performance. Since it’s such a rare machine, it’s quite difficult to nail down the going rate, but estimates place the value somewhere just under or slightly above $2 million. GT1 Evolution models, upgraded versions of the original GT1, have traded hands for upwards of $3.1 million. Sure, that’s a huge amount of money, but what would you rather have? Another Bugatti Veyron, or an astonishingly breathtaking piece of history. 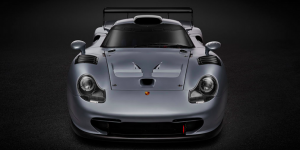 With such bones, it’s easy to accept the 911 GT1’s success on the track, immediately winning its class at the 1996 24 Hours of LeMans. In 1998, it took the greatest prize of them all: a 1-2 overall finish at LeMans, becoming one of the last GT1-style machines to claim overall victory before the prototype era began. Sadly, the 911 GT1’s life was realitively short. By 1999, the GT1 class disintegrated, and Porsche ended the GT1 factory program. Various incarnations of the 911 GT1 were raced by pioneer teams until 2003, but came to an end that same year.

The reason we desperately love the GT1 Straßenversion is the same reason we adore the 1966 Ford GT40. They represent an era when hybrid hadn’t entered the automotive dictionary. When full-on racecars could roam the streets freely and then take not only class, but overall victories at LeMans. When cars breathed fire, regulations were trying to catch up and race machines weren’t just fast. They were absolute works of art.

Congratulations to the Ford Motor Company on an incredible victory at the 2016 24 Heures du Mans. And thank you for giving us a reason to flash back to 1966, 1996 and all of the best cars in-between.