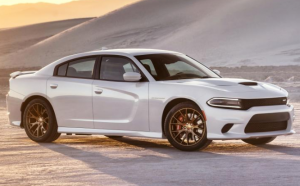 In an earlier post, we highlighted the downright insane Dodge Challenger Hellcat. Over 700 horsepower in a fairly discreet coupe with 10-second quarter mile times is epic. Costing less than $70k is even more amazing and biblically so when you consider the next-cheapest 700 hp factory cars are the $400,000+ Ferrari F12 and Lamborghini Aventador. So how do you take that recipe and make it even more irresistible? Add two doors. Welcome to the 2015 Dodge Charger Hellcat.

If you have been following the Challenger Hellcat, you know how monumental the figures are: 707-hp, 650 lb-ft of torque. Both good enough to land you in under an 11.00 second flat quarter-mile. They remain unchanged for the Charger. The only difference is that now you can take family and friends along as you turn pavement into scorched Earth. Better yet, as nondescript as the Challenger variant may be, with the exception of an aggressive front facia, the Charger is even less assuming. Obliterating six figure sports cars in a family sedan: life hardly gets more entertaining.

To make losing your license an almost certainty, the price of entry is relatively affordable. While $64,990 isn’t exactly Honda Accord money, compare it to the closest performance sedan. Odds are, for that money you’re looking at a Mercedes-Benz C63 AMG. For that, you’re getting 476 hp and 0-60 in 4.1 seconds. Not bad, but that’s a massive 231 hp off of the Charger Hellcat. To put that in perspective, that’s almost as much power as you get from a Subaru WRX. Not to mention significantly slower in the quarter-mile.

Dodge has done something incredibly special in the last two months: released two of the most extreme cars currently in production for highly reasonable prices. The Charger does run $4k up on the Challenger, but for your money you get a full-on family sedan that just happens to run rings around anything under $400k. In our book, that’s a deal very worth making. Check out the video below to hear this beast in action (skip to 2:20).