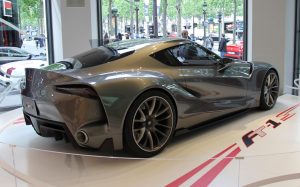 This year has to be one of the all-time greats for automotive reveals. One of the biggest, by large, spectacular country miles, surely is the return of the Toyota Supra. After waiting approximately one hundred million years, and nearly as many false rumors, it looks like the real deal is finally upon us. The prototype has even been caught on multiple occasions cruising around the Nurburgring. When it finally is revealed, what should we expect? We have a few thoughts…

One of the hallmarks of the Toyota Supra was its powerplant: a glorious, turbo inline six. After about 15 grand and some overnighted parts from Japan, these beasts decimate all (you tell ’em, Jesse). The silky powertrain was pretty solid in stock form, and without too much coaxing, can easily produce numbers in the 600-800 hp range. Over 1,000+ if you’re really going for it. Coincidentally, what’s BMW really good at making recently? Yep – turbocharged, inline six engines. Probably not such a coincidence then that the prototypes have been seen leaving BMW’s M development center in Germany.

2. It will be bonkers fast

It’s not exactly a well-kept secret that Toyota and BMW are teaming up for the new Supra (I mean, c’mon, you’re not exactly hiding it when the prototype departs from BMW HQ). To us, that’s incredibly good news. Most likely, it means that the Supra will share an awful lot in common with the current BMW turbo inline six monster, the M4. That car is hardly a slouch (0-60 in 3.9 seconds, 450 hp), so what will happen when the performance ceiling is taken off altogether?

Think about it this way: the GT-R, developed by Nissan, is one of the fastest cars ever produced. So, what happens when a company with far more resources than Nissan teams up with a firm known for making some of the greatest drivers’ cars of all time? Probably something pretty spectacular(ly quick).

Yeah, it’s not going to be cheap. Keep in mind, neither was the original Supra. It wasn’t hard to get top-spec Mk4 Supras, straight from the factory, well into the $50k range. Of course, thanks to the Fast and the Furious bubble, it’s almost impossible to find a clean, unmodified, low-mileage Mk4 for anything under $70k. Which brings us nicely to the upcoming car. Considering the BMW M4 goes for $64-80k, expect the latest Supra to be well beyond that price range. Less Porsche Cayman, and more Nissan GT-R territory. Speaking of GT-R…

4. It’ll be ready for its rival

There’s roughly a zero percent chance that Toyota/BMW engineers are unaware of the immediate comparison the Supra will be put up against. That’ll be the Nissan GT-R, all day long, every day. Even before news of the new Supra broke, at least once per day my Facebook newsfeed featured someone posting “Which would you take, GT-R34 or Mk4 Supra?” along with thousands of likes. That’s how hungry everyone is for a rematch of the Japanese performance titans. We’ve been gearing up for it since the ’90s.

With that in mind, it would be pretty embarrassing if the new Supra was released and immediately got spanked by the now long-in-the-tooth GT-R35. Safe to say that won’t be happening. Expect the Supra to absolutely take the fight to the GT-R, maybe even knocking it down a peg or two in the process.

5. It will be worth the wait

The final Mk4 Toyota Supra left the production floor in 1998. Many, many moons and suns have passed since then. Toyota has had nearly 20 years to think through the return and get it exactly right. Doesn’t really feel like a company that would leave something that substantial to chance. We fully expect the 2018 Supra to surpass even our admittedly lofty expectations. Which makes us unbelievably impatient for it to hurry up and get here.

Welcome back, Supra. We’ve been waiting an awfully long time for you.

Photo thanks to FJ Cruiser Forums