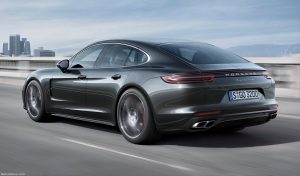 From the start, the Porsche Panamera was a brilliant car. I mean, come on, how can you possibly fault a spacious, four-door, front-engined Porsche that drives awfully close to as well as a 911. There was, however,  one small problem. It wasn’t exactly what we’d call beautiful. In fact, quite a few people, including Porsche’s CEO, described it as the exact opposite. However, the 2017 Panamera has arrived, and it has turned an ugly duck into a stunning supercar killer.

Gone are the lumps. Gone is the smiling face. Gone are the unnecessary lines. What we have here is a Panamera that has been expertly nipped and tucked. The new silhouette is still undeniably a Porsche sedan, but more closely resembles the lines of an Audi RS7 than it does the old Panamera. The front facia brings much needed aggression and the back adds an elegance that was lacking before. It isn’t just better looking than the last one. It’s downright gorgeous.

The interior received a similar refresh. Taking design cues from both the new 911 line and 918 Spyder, both front and back passengers are treated to a far more bespoke, exclusive experience than before. That’s especially true up front, where approximately 1.7 billon buttons have been replaced by touch screens and displays. Where there are buttons, they’re significantly better organized. 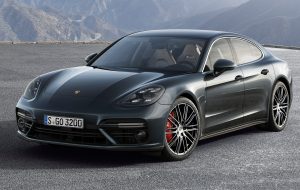 As to be expected, there will be numerous trims and performance choices. But let’s be real, what we care about is the fast one. That being the Panamera Turbo, which will pack a twin-turbo V8 delivering 550 hp to all four wheels. To give some perspective, it already slayed the Alfa Romeo Giulia Quadrifoglio’s Nurburgring lap time, coming in at 7:38. That’s stupidly, obnoxiously fast for a sedan. Which makes sense, given that the 2017 Panamera scoots to 60 mph in 3.4 seconds.

Plus, it has easily the coolest wing deployment process ever fitted to a car. It’s wildly over-engineered, which makes it right at home with this brilliant, beautiful, bonkers four door missile. Fantastic job, Porsche. That’s one heck of a well done redesign.