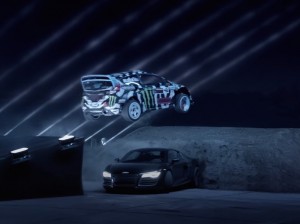 The great thing about the automotive industry is that when it comes to viral videos, it is awfully hard to be disappointed. This week’s newest round of attention-grabbing YouTube hits certainly is no exception. With the Mustang headed to a place it rarely gallops, four drivers going full throttle in total darkness and dancing hamsters, it is hard to find more variety than this.

Seeing a Mustang in the U.S. is a bit like having a really good cup of coffee. It is pretty inevitable on a fairly regularly basis but still nice when it happens. However, that is not necessarily the case overseas. The muscle car has been imported for years but it is far from common throughout most of Europe. With Ford’s rather exciting video announcement, they are looking to change that. The all-new 2015 ‘Stang has “London Calling” blaring in its ears and as the most sophisticated pony yet, it may just buck the trend. It will be interesting to see how European sales react.

There are videos that make you smile with mild amusement. Then there are the kind your friends tell you that you need to watch. Right now. Right this very second. This one is the latter. As the latest insanity-fest in the Ken Block gauntlet, it features him and three other professional drivers on an incredibly tight track. The clip likely would have gone viral with that description alone. However, just to make sure the dials are cranked all the way up to eleven, this Miami-in-the-’80s kind of wild idea takes place in complete darkness. What can the drivers see? Only thin beams of green laser light to guide them at full throttle. Just trust us, you need to watch it. Right now. Right this very second. It is absolutely mental and, needless to say, we cannot get enough of it.

You have likely seen shorter cuts of this ad before but the full length version is even better. Seriously, who doesn’t like hamsters doing hilarious things? Apparently we all like the three Kia mascots and quite a lot at that. Over 200,000 views were added this week alone. With a grand total of over 10.4 million hits so far, viral doesn’t quite say it. If you haven’t seen it yet, you must be running out of reasons by now. If you already have, let’s be honest, it is worth watching again.