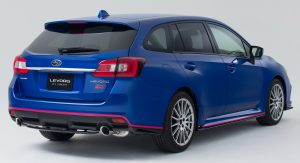 If there’s one thing the world never has enough of, it’s this: all-wheel drive rally missiles. That’s especially true if you want a hatch or wagon. The Focus RS is biblically good, but if you’re looking for rivals or more space, it’ll take some research to find any that come with a warranty. Alas, there may soon be hope. Based on today’s announcement from Subaru, the Levorg STi wagon is about to change all of that. 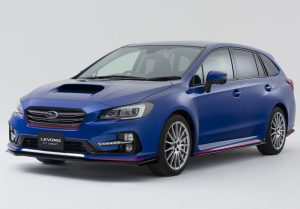 No, the name isn’t particularly beautiful. Then again, neither is the car. But to focus on either of those is to wildly miss the point. Based on stretched Impreza architecture, we’re assuming it’ll be powered by WRX running gear. That means a 2.0L turbo flat-four (aka boxer) putting somewhere around 265 hp to all four wheels. If this is a true, full-on STi model, expect that power figure to jump significantly. So, a wagon with plenty of space for all the kids’ gear that can destroy a windy background, anytime, in any weather condition. Color us massively interested.

There are a few problems, however, and one of them is massive. Subaru plans to sell the Levorg absolutely everywhere except the United States. Pretty good odds that won’t change with an STi edition, but an automotive journalist can dream. Additionally, Subaru has a habit of putting out painfully tempting concepts only to take them away (read: BRZ STi concept. We’re still pretty bitter about that one). Is this just another example? It’s hard to tell, but based on the fact that it looks production ready, probably not. It’s just a matter of whether its a full-on STi model or up-trim Levorg with STi badges everywhere (looking at you, Series.Blue). 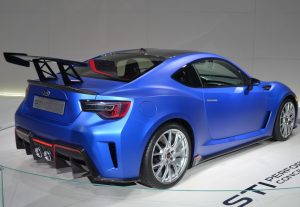 Would we have one over a Focus RS? Probably not, the power differential is a bit hard to ignore. However, for some, the extra space and rally heritage is exactly what the RS is missing. Plus, based on the potential we’ve already seen out of the WRX’s FA20, it won’t be hard to get silly power levels out of the AWD wagon. That’s getting scary close to the perfect mix of practicality and performance.

Subaru, we beg of you: please bring it here. We’ll even forgive for never seeing a BRZ STi come to fruition. But a WRX/Levorg STi wagon? That’s something we’d happily find room for in our driveways.