Motorz? Gearz? What’s with all these awesome car shows that end in the letter Z?

About 5 years ago at the SEMA Show (back when I was doing the magazine publishing thing) I had the exciting opportunity to meet a legend in our industry, Stacey David, who at the time was the host of Trucks!

Then, about two years ago I had another run-in with Mr. David when I had the chance to interview him for one of my other automotive websites, Truckblog. He was just getting his new show, Gearz, off the ground. I wanted to know more about his life, his shows, and more importantly get some advice from a seasoned TV host and producer since I, myself, was just getting started with my own TV show (and admittedly, I had no idea in hell what I was doing). My show at the time was called “Truckblog TV”. Some of his advice was critical in Motorz’s infancy, and whether he knows it or not, I have miles of respect for Stacey. Few people take the time out of their busy schedule for interviews, let alone provide invaluable advice. 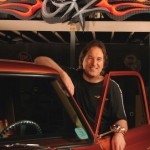 When I re-branded my show as “Motorz”, I didn’t intentionally copy the Z in “Gearz”, as I have created many websites and projects in the past with odd-spelling names when the domain name I really wanted wasn’t available (such as Truck Hownd). In retrospect, perhaps it was subliminally intentional–after all I consider him one of my role models. That fact has been stated on my bio page since the first day this website went online.

So this morning I was thrilled, honored, and humbled when I received this video that Stacey David put together to promote his new season premiere on SPEED this weekend. It’s an awesome shout-out to MOTORZ viewers to watch Gearz on Saturday at 9AM (EST) before they tune in to watch Motorz on Sunday at 8am (EST). Our shows compliment each other quite well, I think, and hopefully one day I can convince Stacey to stop by the set of Motorz to teach us all a few new things on my show!