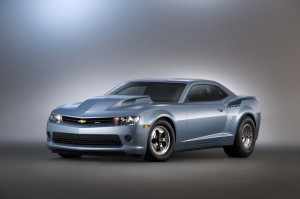 While the SEMA Show certainly attracts attention from major factory manufacturers, few companies have brought more horsepower than Chevy. At first it was a few specialty Silverados ready for any disaster. In case you preferred a more sports-oriented approach, a trio of modified C7 Stingrays followed. Now a selection of properly wild Camaros look to continue this trend of aftermarket excellence. From a boulevard cruising convertible to a fully race-ready dragster, few cars demonstrate this much range.

For the summer crowd, the appropriately named Camaro Spring Special Edition is a paint scheme available for both 2LT and 2SS models. Featuring white paint with blue stripes and interior, this is a very clean approach. The effect is further accentuated by a special bodykit and massive 21″ wheels. Pricing has yet to be released, but adding on several thousand to the cost of 2LT or 2SS trims should paint a realistic picture.

Turning the dial up slightly on the performance scale comes the Performance Garage Camaro. While it looks incredibly aggressive, the coolest aspect is that every component on it can be purchased from Chevrolet Accessories. Besides a dark orange and black paint scheme, this example is a mix and match of high-tier performance parts. The short-throw shifter and performance brakes are taken from the insanely capable ZR1 Camaro. Otherwise, the suspension, differential and exhaust are lifted from the Z/28.

Turing things all the way up to 11 comes the just-mentioned Camaro Z/28. What did Chevrolet do to the Z/28 before bringing it to SEMA? Well, not very much. In fact, nothing at all. According to Chevy’s press release, “There was no need to modify the all-new 2014 Camaro Z/28 for the SEMA Show.” Normally that kind of statement, especially coming from a factory manufacturer, could raise some eyebrows. Not in this case with a 7-liter V8 nestled under the hood. We’ll just have to wait to see what the aftermarket world brings for this special Camaro.

Even as extraordinary as the Z/28 is, the 2014 COPO Camaro takes it to an entirely different planet performance-wise. Made for the drag strip and nothing else, this track-only example offers five crate engine options to buyers. For 2014, Chevy added the massively potent  5.7 liter supercharged V8. As is usually the case with COPO cars, only a very limited number will be produced, so get in line now. As for the price point, expect somewhere close to six figures depending on specification. 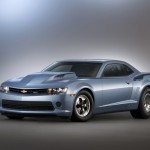 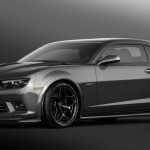 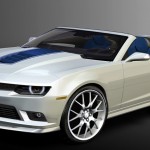 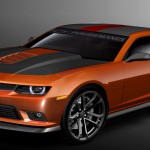