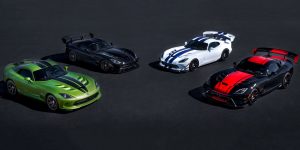 Bad news, Dodge Viper fans: the snake is no more. While it’s an incredibly sad announcement, it isn’t exactly surprising. In an era of hybrids and decreasing displacement (even among hardcore muscle cars), an 8.4L V10 wasn’t long for this world. Slow sales, leading to MSRP discounts up to $15,000 just to entice buyers, definitely didn’t help. But, at the very least, there’s one glimmer of hope: the most brutal American sports car might be coming back. Maybe.

Frankly, the Viper’s death was a long time coming. As early as January 2016, Fiat-Chrysler (FCA) was making it known 2017 would be the last production model year. We will be getting four special editions to mark the 25 year milestone, but talk about bittersweet. Plus, the commemorative editions (three ACRs and one GTC) are limited to unique color combinations, with no mechanical differences. Cool nevertheless (especially the GTS-R edition), just not particularly memorable in the long term.

We’re always sad when iconic cars die, but the Viper’s departure leaves us particularly depressed. In many ways, it was the last of the truly untamed, “kill you just for fun” supercars. Yes the side exhaust was insanely loud all the time and made the cabin ridiculously hot. Yes the handling was weirdly heavy yet vague. And yes everything about the car felt as thought it genuinely wanted to cease your time on this Earth. It is that savagery and lack of refinement that gave the original Viper its charm. It’s the ultimate anti-regulation, anti-healthy and safety rules machine. Even as time moved on, each Viper generation kept a piece of that brutal character alive and well.

Unfortunately, that kind of brutality could only go on for so long. Buyers grew tired of the car’s roughness, and considering the price easily exceeds $90,000, it’s hard to fault them. The Viper’s excuse was always that, yes it’s rough, but all in the name of performance. In 2016, it’s entirely possible to buy a car that’ll beat a Viper, be far more economical and much, much more pleasant on a daily basis. All for the same, if not slightly less investment. It’s a battle the snake was bound to lose.

Is the Viper gone forever? If FCA’s CEO Sergio Marchionne has anything to say about it, possibly not. The problem is, no matter what, the replacement will be on an all-new platform. Which will take some substantial development i.e. time. Even if it ends up being based on the (unbelievably gorgeous) Giulia’s framework, it’ll be quite a while before the resources are available to re-launch America’s venomous supercar.

If this all sounds a bit familiar, it has happened before. The car was originally killed off in 2010 but came back to life once the brand began to recover from the Great Recession. That gives us some hope that we’ll see the Viper name resurrected again. Until then, here’s to one of the most ferocious, unforgiving and yet lovable supercars ever put into production.

The Viper is dead. Long live the Viper.