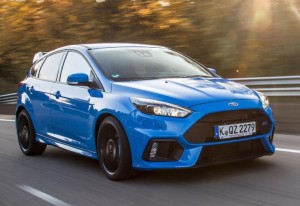 As far as purists are concerned, there’s only one type of layout for sports cars: front engine, rear wheel drive with six speeds in-between. At least that’s what common knowledge suggests. Seemingly in the face of it, AWD sports car sales have skyrocketed over the past decade. It’s in large part why Subaru has been out-selling VW in the U.S. long before dieselgate. Does all-wheel drive truly have a place in the sports car realm? Here’s our take….

There’s a good reason why the majority of sports cars throughout history have featured rear wheel drive. It’s simple, provides outstanding control, can lead to copious amounts of oversteer and leaves the front wheels with only one task. All-wheel drive on the other hand isn’t as precise, often leading to massive understeer. Also known as the sound of disappointment. At least that’s how it used to be.

As AWD systems have advanced, particularly in sports car applications, their ability to not only match, but exceed RWD performance has become increasingly common. Beyond all-weather traction, performance all-wheel systems provide incredible cornering speeds and spare-my-kidneys launches. Better than all of that is an ever-sharper balance and neutral handling. 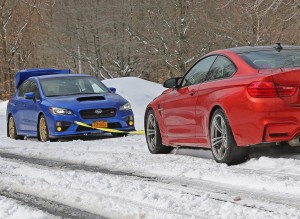 When legendary AWD cars like the Subaru WRX STi or Mitsubishi Lancer Evo are pushed, they can maintain the correct cornering line at ludicrous speeds. However, kill the traction control, bury your foot and a playful amount of oversteer emerges. No, AWD has nothing on lightweight RWD drift missiles, but it does provide quick lap times and nearly as much fun. Drifting is a blast, but so is taking corners fast enough to relocate your eye sockets.

With minimal understeer, ballistic cornering speeds and space shuttle like launches, the case for four wheel drive becomes clear. And we haven’t even gotten to the party trick yet: snow handling. For those who live in climates with true winter seasons, cars like the STi and Evo are a gift from above. Instead of packing the sports car away and dreaming of summer, these AWD rally machines become arguably more fun when conditions get slick. True, RWD cars can also be fun, but they can’t hope to match the sheer grip or velocity of equally powerful cars putting down power to all four corners.

It’s hard to argue against a rear-wheel drive setup for track work. It ultimately is quicker around a circuit and gives the driver that many more options for putting down power. If, on the other hand, you’re looking for an everyday, all season car that can smash both brisk lap times and snowy backroads, AWD might just be the way to go. It not only has a place in the sports car realm, but as it stands, it’s adding a new definition to it.