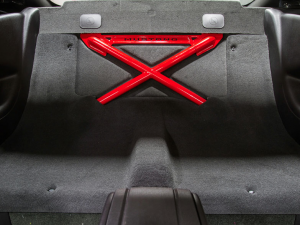 Among Ford’s launches at the 2015 Detroit International Auto Show was the new chief Mustang, the Shelby GT350R. Promising hugely impressive performance and no-compromises design, this tire-obliterating snake should be hitting public roads in the near future. Not interested in waiting or don’t plan on trading in your beloved pony car? Thanks to Roush, you can easily add a GT350R feature to your Mustang: the rear seat delete.

If you don’t have use for them, removing the rear seats is one of the most cost effective ways of reducing weight. Initially, the delete was only available for the (fantastically named) 2012-2013 Boss 302 Laguna Seca. With the Roush kit, the option can now be fitted to the 2005-2014 Mustang V6, GT and GT500.  With basic tools, the straightforward, three piece installation can be completed in around two and a half hours. Not cutting, welding, machining, etc. is needed and the entire job can be done in your driveway.

Beyond contributing to a unique interior appearance, the Roush delete weights 40 percent less than standard seats. Better yet, thanks to a Ford Racing x-brace, a little extra stiffness is added. The brace as standard is painted Ford Racing Grey but can be ordered in nine factory matching colors.

For more information and to purchase, head to the Roush official website.