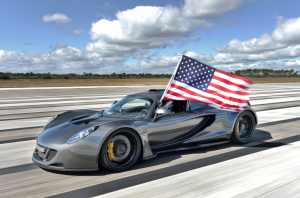 As time marches forward and society progresses, it’s not always fun to be an auto enthusiast. Emissions standards, shrinking displacement and ever fewer new sports cars occasionally bring on a bit of gloom. However, every once in a while, in a roar of unrestrained internal combustion, we’re reminded the heart of American muscle is still beating. Get ready for 270 mph of pick-me-up. Get ready for the Hennessey Venom GT.

That number is no typo. Bugatti Veyron, eat your heart out, because the Venom GT winds all the way up to 270 mph plus. Unlike wild claims we regularly hear from automakers, John Hennessey took the effort to back up that number. Going to John F. Kennedy Space Center’s 3.2 mile runway, the Venom GT hit 270.49. Had there been slightly more room and better conditions, we have little doubt it could have hit the estimated 278 mph top speed.

How is such a feat accomplished? Though the Venom GT is based on a Lotus Elise/Exige, it is so wildly modified that each vehicle is officially a Hennessey, no longer considered a Lotus. The specs? We recommend you sit down first. The 427 cubic inch V8 puts out an almost unbelievable 1,244 brake horsepower. Emphasis on brake. That’s important for a very good reason.

Most automakers will give crank horsepower, which is the power as measured from the crank. The problem is a significant chunk of that power, up to 20 percent for all-wheel drive cars, is lost by the time it travels to the wheels. Brake horsepower, on the other hand, is the measurement of power at the wheels themselves. Put simply, every single one of the Venom’s 1,244 ponies is at the driver’s disposal. Holy. Schnikes.

One of our favorite stats is the total weight of 2,743 lbs. For comparison, the featherweight, 167 hp Mazda Miata comes in at 2,480 to 2,619 lbs. That makes it easier to comprehend the F-22 like performance of Hennessey’s creation. On a very cool side note, the stereo was designed by Aerosmith lead singer Steven Tyler, who owns a Venom GT.

Just in case 270 mph isn’t enough for you, Hennessey has already unveiled the Venom F5. It’s name, the most violent class of tornado, hints at a possible top speed. Although estimates are not in the official press release, an F5 tornado has winds from 261 to 318 mph. We’re betting it gets pretty close to the low range of the latter figure. Unbelievable doesn’t quite say it.

For now, the Venom GT remains on top. Feel like one of your own? Bring a check for $1.2 million and you might be lucky enough to take home one of the planned 29 examples (as of April 2014, 16 have already been purchased). For a first hand look at this physics defying time machine, check out the mind bending 270.49 mph run in the video below! Head to Hennessey’s official website for detailed info on the GT, F5 and much more.