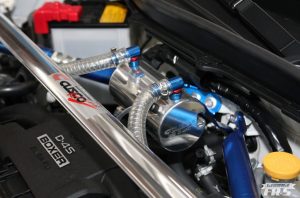 It’s hard to overestimate the advantages that come with a turbocharged car. From the rush when boost kicks in to the flexibility when building an engine, having a snail or two feeding your engine is a beautiful thing. However, boost requires a decent amount of supporting hardware that you might be unfamiliar with. We’ve already discussed wastegates, and today we’re moving on to another key element: oil catch cans. Here’s what you should know…

For the most part, explosions that occur during combustion are tightly confined within the cylinder. Yet, there is a very fine oil mist that can occasionally escape past the piston and into the crankcase. If that continues over a period of time, it’ll cause pressure to build up within the engine block. Not good. Thus, there needs to be a way to vent that pressure. That’s where the positive crankcase ventilation (PCV) valve comes into play. As the name suggests, it allows that air/oil mixture to escape the crankcase and routes it back through the intake system.

Which brings us to problem #2. Since that mixture includes oil, you really don’t want it winding up back in the crankcase. It causes the same build-up mentioned above and can become a significant issue over time. An oil catch can solves the problem altogether. Acting essentially as a filter, as air from the PCV enters the catch can, the oil and harmful particulates are removed. The clean air is then routed to the intake.

The benefits? You’ll prevent pre-ignition/engine knock and the above mentioned carbon build-up. When buying a catch can, make sure there’s some quality filtering going on, not just a nicely packaged exterior. This is one of those times when spending a little bit more can help your engine longevity.

At this point, you’re probably wondering why cars don’t come with catch cans from the factory. A) it’s an additional cost and B) it does need to be emptied from time to time as the oil accumulates. Since consumers aren’t particularly interested in paying more or especially doing more work, it’s a factory no-go. For us enthusiasts, however, it’s very much worth the price of admission. Plus, who doesn’t love an excuse to pop the hood and do some hands-on work? Far as we see it, win-win.

Have any questions about oil catch cans and if your car should have one? Ask us on Facebook and Twitter!