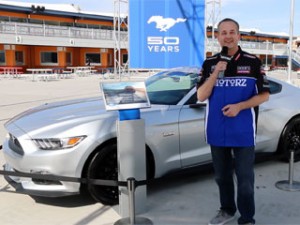 Today is a special day in Motorz history. Not only has our 80th episode arrived, but we are celebrating the 50th anniversary of the all time classic: the Ford Mustang. For as long as Motorz has been running, one of our absolute favorite cars has always been the iconic pony. It is not difficult to see why. Every chapter of the vehicle’s long and illustrious evolution is littered with landmarks, incredible achievements and ties to Americana. Join us as we look back at 50 years of the Mustang in Episode 6 of Season 6!

Even at its birth, the sportiest Ford seemed destined for great things. Original estimates stated the car would sell less than 100,000 units in the first year. Not only was that guess eclipsed in the first three months of production, but another 318,000 would go before 12 months had passed. That’s a record that stands to this day, not to mention the over five million cars sold to date that bear the incredible name.

To celebrate this momentous history, from day one to Mach One and beyond, we’re highlighting all of the Motorz episodes that have featured the Mustang. From lowering (which we’ve done three times) to adding a new stereo, supercharger, air suspension and more, we have undertaken countless projects with America’s favorite muscle car.

Check it all out in a very special Motorz episode…