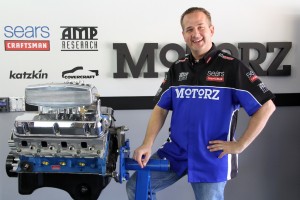 San Diego, Calif. – August 10, 2012 – The crew from Motorz (www.motorz.tv) will soon feature custom crew shirts sponsored by family-owned and operated Pitimage. The new host shirt has been designed in the signature Motorz-branded blue, and crew shirts designed in the custom Craftsman® red, and the whole crew will feature the shirts later this year as they wrap up filming of season five.

“With Motorz, it’s important to have crew shirts that are both attractive and functional,” said Chris Duke, host and executive producer, Motorz. “We’ve got to be able to move comfortably anywhere in the studio, whether it’s under the car, under the hood, inside the vehicle, reviewing the latest products for our Partz segment, or talking with our viewers during the Letterz segment. Our Pitimage shirts can handle whatever we dish out and they look great, too.”

“Chris came to us with a specific idea in mind for the Motorz apparel,” stated Eric Alton of Pitimage. “With his input, our in-house design team created a unique design using a comfortable, lightweight fabric. We used the latest digital printing technology to complete the four-color process sublimation printing. Because we are also the manufacturer, the design transition on the fabric is assured, which is really important for branded apparel.”

Based in Simi Valley, Calif., Pitimage is well known in the sports and automotive industries offering variety of custom and casual apparel for both men and women as well as vinyl wraps and more. For more information, call 805-522-4050 and mention Motorz, or visit www.pitimage.com.

Motorz, established in 2008 and produced by Duke Networks, is a popular automotive improvement series produced in a home garage environment showing viewers how to properly maintain a vehicle and install aftermarket accessories with step-by-step instructions in an entertaining “you can do it, too” format. Now completing its fifth season, Motorz reaches hundreds of millions of viewers worldwide via cable and satellite television channels, Internet distribution, video-on-demand, and mobile access. For more information about Duke Networks, visit www.duke.net. For more information about Motorz or to watch the show, visit www.motorz.tv. For advertising and sponsorship information, visit www.motorz.tv/advertising. LIKE Motorz on Facebook at www.facebook.com/motorztv and follow on Twitter @Motorz.