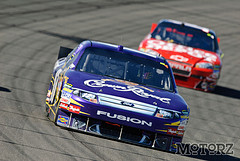 Building up vehicles and showing our viewers how to install aftermarket products and maintain their vehicles is what we love to do. But we also love motorsports… whether it’s supporting the Glenwinkel Express at the drags or checking out the races, we try to get to it all. Last weekend we sent our own Sherman Lee to Fontana, CA for the big Nascar Pepsi Max 400 event at the Auto Club Speedway.

After a green-white-checker finish, Tony Stewart forged ahead of Clint Bowyer to the finish line in Sunday’s Pepsi Max 400 to win his first ever race at the 2-mile track; his second of the year and the 39th of his career. Current Sprint Cup Series leader Jimmie Johnson leaves his home track 36 points ahead of second-place Denny Hamlin. Only Hamilin, Kevin Harvick (54 points back) and Jeff Gordon (85 back) are within 100 points of the four-time defending champion with six races left.

Roush Fenway Racing had a unfavorable day, which got a team-best finish of 30th from Matt Kenseth. Greg Biffle’s engine exploded on lap 40, relegating him to a 41st-place result. On lap 58 Carl Edwards’ car died in turn 4 not even able to return to pit road. After his crew repaired his No. 99 Ford 14 laps later, Edwards returned to the track and finished 34th. Biffle and Edwards both saw their championship hopes go up in smoke after a disappointing day.

Kyle Busch saw his title aspirations disappear when his engine blew on lap 154. He finished 35th. Jeff Gordon lost his lead after being flagged for speeding on pit road during stops under caution on lap 156. He rallied for a ninth-place finish but still lost significant ground to Johnson.

Chevrolet continues to dominate the leaderboard by sweeping the top three positions.

This will be the last appearance for a Chase for the Sprint Cup Nascar race at the auto Club Speedway in Fontana, CA. Next year, the speedway will only host one Nascar race, in March.

The Auto Club Speedway is the largest sports venue in Southern California in size, covering apporximatley 565 acres. The infield alone is made up of 131 acres and there are more than 130 acres of landscaping throughout the facility. How do other notable SoCal venues stack up? The Home Depot Center is 125 acres, Dodger Stadium is 300 acres, Angel Stadium is 140 acres and the Honda Center is 100 acres. By the way, Disneyland is 210 acres and when combined with the California Adventure, the entire Anaheim-based them-park complex is approximately 300 acres.