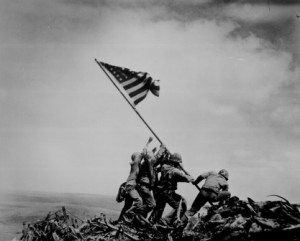 Today is Memorial Day. Any three day weekend certainly is welcome, especially when it is a federal holiday. However, in the middle of grilling with the family or even just kicking back on the couch, it is easy to forget the real reason for this specific long-weekend. After all, Memorial Day is about one thing above all: those who have and continue to serve the United States of America in her armed forces. From the struggle for our independence to the ongoing fight in the Middle East, our nation’s bravest have carried on a legacy of supreme dedication, selflessness and sacrifice all for the defense of that most noble cause, liberty. Perhaps it is appropriate for even us, the most diehard car fans, to take a moment to reflect on what this day truly represents.

It is a cliche but a true one: freedom isn’t free. Every conflict, especially the ones during freedom’s hours of maximum danger, has a terrible human cost. Although the lack of accurate records make it difficult to know, it is estimated that over 50,000 Americans gave their lives for the birth of the nation. When the country broke in half, millions answered the call to arms on both sides. Approximately 750,000 soldiers gave everything they had as brother fought against brother. Things took a global scale during the first World War and our courageous men and women did not shy away from the defense of what we hold most dear. Well over 100,000 gave the supreme sacrifice in that effort.

All of those that served this nation during World War Two, whether on the front lines or on the home-front, have been labeled as the greatest generation. There is a good reason. From Germany to the South Pacific and virtually everywhere in-between, thousands of young men, many not a day beyond 21, signed up to fight. More than 405,399 gave what President Lincoln described in the Gettysburg address as “their last full measure of devotion.”

Perhaps it is that same speech that best describes the core meaning of Memorial Day. “We here highly resolve that these dead shall not have died in vain. That this nation, under God, shall have a new birth of freedom, and that government of the people, by the people, for the people, shall not perish from the Earth.” We are a nation that has many different political beliefs and to say the least we do not hesitate to share them. Yet, when our way of life is threatened, no citizens are quicker to stand side-by-side and fight next to each other. What divides us is insignificant compared to what united us. The incredible actions of our armed forces since the first waving of the Stars and Stripes demonstrates that in a way mere words never could.

From Yorktown to Iwo Jima and Berlin to Baghdad, the men and women of the United States Army, Air Force, Navy, Marines and Coast Guard have never backed away from the defense of freedom around the world. Even as we celebrate with our families this weekend, many thousands are oceans apart in the far corners of the world. Today, perhaps we can take a few minutes and think of those who have given so much, so many their own lives, so that we may live in unquestioned freedom. Today is a day for their honor and remembrance. Today is Memorial Day.