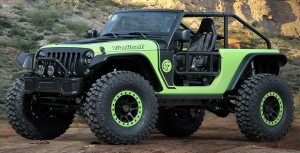 Even after all these months, it’s crazy to think you can just buy a 707 hp Challenger or Charger directly from Dodge. For the vast majority of people, that’s the perfect mix of power, handling and chassis. No need to go any further. Yet, for those of us who truly don’t know the meaning of the word “content,” the same question keeps coming to mind: that’s great, but what if you dropped all that power into a totally inappropriate application? Amazingly, Jeep just answered that question… 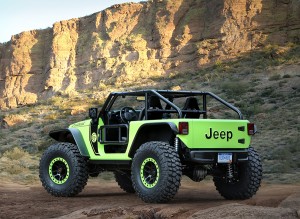 Welcome to the greatest thing that has ever happened to Earth. Ok, maybe not the greatest thing, but this has got to be top five. It’s the Jeep Wrangler Trailcat concept and it has, you guessed it, 707 horses at work. In a vehicle that weighs about as much as a pencil sharpener.  To at least attempt to control that power, the chassis has been stretched 12″, massive 9.5-inch BF-Goodrich Krawler T/A KX tires are added to 17″ beadlock wheels , Dana 6 axles sit front and back, and all comprehensive suspension work was done by Fox.

Otherwise, the modifications are largely limited to bold yet beautifully integrated exterior and interior aftermarket components.

Then there’s the way this thing sounds. The second you start the Trailcat, two things are clear: it came to chew bubble gum and destroy worlds. And it’s all out of bubble gum. In all our time with the auto industry, we’re struggling to remember a vehicle that sounded this terrifying straight from the factory. Unlike the large bodied Challenger and Charger, the Wrangler provides little direction for that glorious sound except out into the world. It’s mind-blowing, especially coming from a Wrangler. 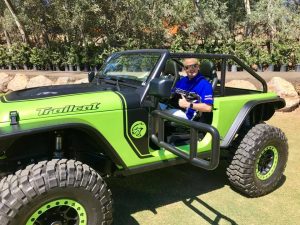 Further details remain on hold for now, but Jeep announced earlier this year that we can expect to see the Hellcat treatment come to the seven slot grill. We all assumed that meant a bonkers Grand Cherokee. But maybe, just maybe, the awesome insanity of the Wrangler Trailcat will slip through the cracks as well.

Now to get started on that Dart Hellcat…