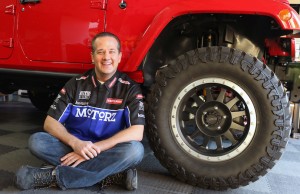 This is a very good time to be a Motorz fan. Not only has a new episode just been released but a huge amount of new content for this, and many episodes to follow, is along for the ride! Interested in how to turn your Jeep into a full-on off road beast? Long time fan of Alan Taylor? Crazy about Barrett-Jackson? All of the above and even more is waiting in the latest episode of Motorz!

We are beyond thrilled to introduce our new co-host, Alan Taylor, to Motorz! You’ve probably seen him on networks including ABC, CBS, CNN, FOX, and NBC. That’s not to mention his incredible 15 years on daytime’s #1 morning talk show, LIVE with Kelly and Michael. He’s interviewed A-List car guys from Tim Allen to Jay Leno and many more.

Needless to say, he’ll be right at home here. In his first gig as our co-host, he travels to the internationally known Barrett-Jackson auction to showcase the world-class cars in attendance. He even got an interview with Craig Jackson, CEO of Barrett-Jackson!

Sound like a great episode? We’re just getting started! Chris will be begin taking our project Jeep Wrangler from stock to extreme. The first steps include adding a MetaCloak 3.5″ suspension lift, along with Method Race Wheels and Atturo Tires. To give you an idea of just how far Chris is going to take our Jeep, it will be featured in the Hypertech booth at the 2014 SEMA Show. With that in mind, you know it definitely is not going to be mild.

With so much content all in one place, what are you waiting for? Click play on the video below and get ready for another epic Motorz episode!