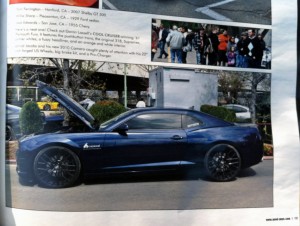 If you watched our 2010 SEMA Show episode, you saw Chris interview Jarrod Jacobs and his 2010 Chevy Camaro which was parked right outside the entrance to the North Hall of the Las Vegas Convention Center.

Mr. Jacobs continues to parade his kick-ass Camaro at car shows and was even recently spotted in the Good Guys Gazette, a magazine the Good Guys publish for their members. If that’s not cool enough, there’s that infamous Motorz TV sticker still on his side window!

Here’s the interview from the SEMA Show, in case you missed it, courtesy of our Motorz TV Extras YouTube Channel (please subscribe!)…