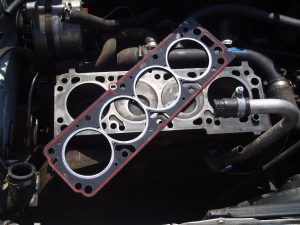 A blown head gasket might not be the hardest thing to replace, but it can be incredibly involved, especially if you own a newer car. Is a head gasket something you can fix yourself, or is it something best left in the hands of the professionals? The short answer is yes — you can fix it yourself, with a little bit of preparation. How? Read on and find out!

First, Is the Gasket Really Blown?

The head gasket sits between the engine block and the cylinder head in your car’s engine — if you’ve got a V6 or any other V-configuration engine, you’ll have two head gaskets. There are a few things that can indicate a blown head gasket, including:

Now that you’re sure the gasket is blown, it’s time to replace it. How do you get started?

If the replacing your head gasket isn’t an option — either because you lack the skills to replace it, or having it done professionally is prohibitively expensive — you may be able to repair the leak with a leak-stopping liquid. These products are designed to repair the gasket and stop the leaking coolant. Many of them are easy to use — simply pour them into the engine block, and let the circulation do the rest. Some do require you to drain and flush the antifreeze system, but it’s infinitely simpler than replacing the gasket — and much cheaper than having it done professionally.

The exact method for replacing your head gasket will vary depending on the make and model of your car, but you need to be prepared to disassemble the entire top end of your engine to replace this gasket correctly. You’ll need:

Now, after you’ve disconnected the battery, start disassembling the upper part of your engine. You will usually need to remove the air box and intake hose, the alternator, the A/C compressor and the water pump, in addition to any hoses and wires connecting these to your cylinder head. Now you should be able to remove the intake cover and expose the head bolts. Remove the bolts — without accidentally removing any of the bolts holding the valve springs in place, because you don’t want to inadvertently launch valve keepers across the garage — and lift the cylinder head free.

You will need to clean both the block and the cylinder head well to remove any gasket residue before putting the new gasket in place.

Now, put the new gasket in place, replace the cylinder head and start reassembling the engine in reverse order.

That’s all there is to it! If coolant has leaked into your engine, you’ll probably want to change and flush your oil as well, just to make sure the coolant doesn’t cause any more damage. Other than that, once your engine is reassembled, you’ve just replaced your head gasket and extended the life of your car.

Do you have any advice? Please post in the comments section, below.