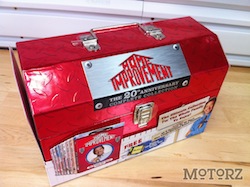 I watched almost every episode of Home Improvement starring Tim Allen when it was on TV and thoroughly enjoyed every moment. To say that it hasn’t influenced my life in some way would be an understatement, considering the fact that I have my own “Tool Time” TV show called Motorz which heavily features Sears tools and is about to begin its 5th season on TV and the Internet.

For years I have been trying to obtain DVDs of all 8 seasons with very little luck. I always wished they would release a boxed set. Thankfully today, 20 years later after the first episode aired on September 17, 1991, it happened. I can finally sit down and watch all the episodes in chronological order with my kids. I’m sure they’ll enjoy them as much as I did when the show was on TV.

As expected, the complete DVD collection comes with all 8 DVDs in a faux cardboard tool box. An added bonus is a Binford tool (hey, my first–how cool is that!?) which is an “all-in-one” tool combining a 10-foot tape measure, level, pen and sticky note pad of paper (with a belt clip on the back).

There are a lot of bonus features, too, and I’m not just talking about bloopers and audio commentary from the producers. It includes “Tim Allen Presents: The Home Improvement User’s Guide” (a reunion special) which I’ve been trying to find for years, and quite a bit more. There’s a total of 4,697 minutes (a little over 78 hours) worth of video here!

I pre-ordered this when I first heard about it from Tim Allen himself on Facebook a few months ago. If you are a huge fan of his show and like me, have been looking for the complete boxed set, it has finally arrived. You can buy it online and hopefully in stores by now, too.

BTW did you know that Tim Allen is returning to TV with a new sitcom on ABC? So cool and exciting! Follow Tim to find out the latest! He’s been posting behind-the-scenes photos and other info lately…