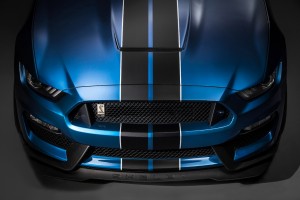 If you were looking to get your hands on the 2015 Shelby Mustang GT350R, you might run into a bit of trouble. Only two prototype vehicles and 35 competition-ready GT350 models were produced for a slim total of 37.

To make matters worse – or better if you’re an avid collector – only 100 Shelby GT350 models with the 2015 year designation will be made. Once the 100 limit is reached, the manufacturer will switch over to production of the 2016 year models.

Out of the 100 total models, half will be outfitted with the Technology Package, while the other half will be given the Track Package.

Why Is This Year’s GT350 Getting a Limited Run?

As Henry Ford III, the company’s performance marketing manager, so eloquently put it: “To honor the passion of our fans for Shelby GT350’s 50th anniversary, a limited run of GT350 models will be built in 2015; these cars will be highly coveted by both Mustang and Shelby enthusiasts alike.”

Why is this being done? Well, aside from it being the 50th anniversary of Shelby, 37 is exactly the number of vehicles that Carroll Shelby wanted to produce back in the 1960s. As such, the company is offering a limited run of this year’s vehicles in honor of Carroll Shelby and the 50 running years of business.

The GT350 offers one of the most powerful Ford engines to date: a 5.2-liter V8 capable of outputting well over 500hp and an estimated 400lb-ft (542Nm) of torque – we’re still waiting on final specs. A six-speed manual transmission powers the rear wheels through a Torsen limited-slip differential, tuned to perfection by Ford. The chassis sits atop 19-inch carbon-fiber wheels.

Both the GT350 and the GT350R have been upgraded with a stiffer suspension, better brakes and new feature styling for the interior and exterior.

They’re set to go on sale later this year, sometime in the fourth quarter. No word on what you’ll have to do to get your hands on one. Perhaps you’ll need to clean the entire Ford manufacturing plant with a toothbrush first?

The Original Ford Mustang Shelby GT350 R Is up for Auction

Speaking of GT350R, the original Mustang Shelby GT350 R – yes, the same one that won the 1966 SCCA division title, raced in 24 Hours of Daytona and won head of class at the 12 Hours of Sebring race – is being auctioned off at the RM Auction next month.

Estimates put the price somewhere in the range of $850,000 to $1 million. If you have the dough, you can head on over to the event and put in a bid. Not only does this bad boy have a history of winning, it was one of the only 34 cars that Shelby built back in 1965. It also happens to be in pristine condition.