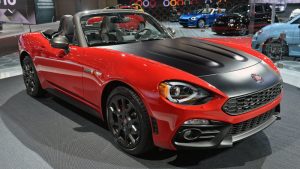 Let’s start this one off with a controversial sentence: Miata isn’t always the answer. While that will surely offend some diehard MX-5 enthusiasts, let’s be honest: 155 hp is 155 hp. It’s not going to set blistering lap times or throw you back in the seat. Granted, that’s not what the Miata is about. But considering it now costs upwards of $30,000 for a Club-spec trim, a tiny bit more power seems like a reasonable request. Good news, friends: the Italians have heard the call. Enter the Fiat 124 Abarth. It’s nearly mechanical identically to the Miata, but which one very sweet change. 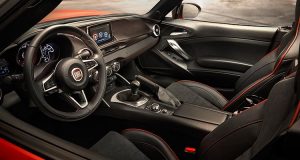 Ok, so it doesn’t exactly add a huge amount of power. In fact, it’s almost numerically indifferent: there’s a 5 hp bump to 160. Torque, on the other hand, has a very healthy growth spurt to 184 ft-lb. And here’s why you shouldn’t care about the fairly minor difference: goodbye SkyActive 4, the 124 Abarth has a 1.4L turbo.

As in the same engine out of the 500 Abarth. Besides sounding unreasonably good for such a small engine, this turbo four also has proven to have surprising potential. It’s not uncommon to hear stories of stock 500 Abarth’s running with boost dialed up to 26 psi. While we really, really don’t recommend that, it just shows the strength of the foundation.

Though the engine is completely different, the rest of the chassis and suspension is nearly identical to the Miata. Not a bad thing at all, considering the MX-5, particularly the current gen, is one of the best drivers cars ever made. The only real weak spot, excessive body roll, apparently has been tightened up for the 124 Abarth. Whether that’s true or not we have no idea, but the prospect of a boosted, tightened down Miata from the factory is incredibly enticing. 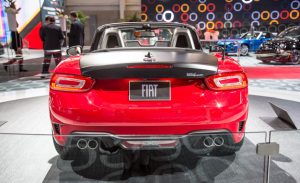 Other major differences: the Abarth looks substantially better (in our humble opinion) than the already gorgeous Miata, has a slightly nicer interior and can be ordered with lovely Recaro seats (that look suspiciously similar to Evo 8 equipment. Very, very cool). All in, you’d expect the price tag to be somewhere around $35-40k, which is right where initial estimates placed it.

Nope. Not even close. For a full-on Abarth, you’re looking at $29k. Throw in the Recaro seats, and tax/title/delivery will land you at $30k on the nose. That’s less than the non-boosted, not-quite-as-pretty nor pleasant MX-5 Club.

So for less money, you’re getting a car that a) handles like a Miata b) goes/sounds like a 500 Abarth and c) looks like a mini-Maserati (especially from the rear). You won’t even have to wait long, as the 124 will be arriving on our shores this summer. They say when something sounds too good to be true, it usually is. But in this rare case, it might not be. Stay tuned for more. We certainly will.