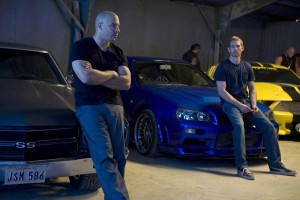 The Fast and the Furious. It’s hard to think of a more instantly recognizable series of car films. Tougher yet to name one that has captivated such a wide audience. Regardless of age, car preference, career, etc., it’s almost impossible to not like, at least in some way, the ever-growing franchise. From the ridiculous to genuinely impressive, some of the most referenced car culture lines originate from The Fast and the Furious films. As a small tribute, we’ve put together a few of our favorite moments, starting with the first film:

If you’re in the same category as yours truly, the F&F franchise kicked off during the high school years. Daily transportation: school bus. So when we saw Brian’s bright green Mitsubishi Eclipse roll across the screen, it took days to reel jaws back up off the floor. Subtle? Who needs subtle when you’re 16? From the fake roof scoop to massive spoiler and neon green underglow, it may look way overdone now, but at the time it was a new bedroom poster. True, the murdered out Civics received screen time first, but it was the Eclipse that we first noticed. It may be safe to say that this car alone kick-started a new generation of car fanatics just by rolling onto the screen.

This is one of those scenes that’s so good because it’s so bad. When pushing way too much nitrous…sorry…NOS through your engine, there are many things to be concerned about. The health of the manifold typically isn’t high on the list and definitely should not be in danger of failing. But that’s not what makes this scene art. Instead, it’s the passenger floorboard, due to reasons far beyond our grasp, coming unscrewed and flying under the car. There are so, so many questions: the connection to the manifold danger and floorboard failure, why the floorboard flies under and not in, why the floorboard comes unscrewed at all…the list goes on for hours. Yet, it has become one of the most quoted, referenced and affectionately chastised moments of any car film. All for good reason.

For the truly infected among us, it’s hard to even order a tuna sandwich without thinking of this gem. Not a lot of back story is provided, but then again it’s The Fast and the Furious. Plot never was a big priority. Basically, Brian likes tuna without crust, seems to like Mia and Vince really doesn’t like Brian. If you haven’t seen the film before (if that’s even possible), that’s pretty much all you need to know. Bonus points for anyone running a “I Like The Tuna Here” window sticker.

“Nice car, what’s the retail on one of those,” and the unbelievably condescending reply led to one of the greatest exchanges in car film history. Its has also likely led to more than a few confused exotic car owners who regularly receive exactly the same question at the lights.

Even with the world’s longest 1/4 mile and the Charger defying physics in pulling a wheelie during a burnout, this scene is amazing. Taking the two star cars, with both antagonists behind the wheel, and lining them up for a drag is the stuff of F&F legend. Classroom debates over which would actually win helped lead to friendly USDM vs JDM rivalries. One camp winding up in STIs with the other taking the keys to new Challengers. No matter which you lean towards, there’s nothing quite like the sight of a 2JZ Supra lined up alongside an original Charger. That exact imagery would take on a far more powerful meaning in Fast 7.

Additional bonus points for using the phrase “I used to drag here back in high school” when pulling up alongside a buddies car.