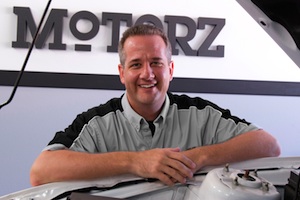 The event will take place from November 3-5 and will showcase aftermarket products from SEMA manufacturers being installed on Ford’s latest vehicles. Duke and his Motorz TV crew will perform installations live daily, in addition to coaching enthusiasts (winners of the eBay 2009 Motors Master Contest) through live installations of their own.

Duke says, “This is a very special opportunity and an honor for Motorz to be selected by eBay and CarDomain to do what we have been doing for the past 18 months on the show! The event will encourage more enthusiasts to get out there and work on their own rides, and show manufacturers how to promote their products with high-quality videos like those we produce on Motorz TV.”

Duke Networks will shoot the installs on video, then edit and produce the final product for the participating manufacturers, Motorz TV distribution, as well as SEMA’s website. Duke Networks will also be streaming live video coverage of the event to its Motorz TV website, www.motorz.tv.

“We couldn’t think of a more perfect situation than to have Chris Duke doing what he does best, live on a stage at the SEMA Show. We are very excited to have Motorz TV involved with this event”, said Famous Rhodes, Director of eBay Motors.