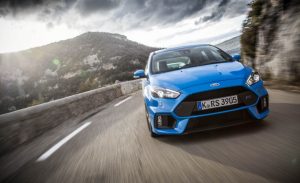 It’s hard to think of a car in recent history more highly anticipated than the Focus RS. From the second it was announced the ultra hot hatch was coming to the States, enthusiast excitement has been genuinely palpable. Even before the first drives took place, the recipe alone was cause for joy: A 345-horsepower, four wheel drive, 0-60 in 4.7 seconds, razor sharp five door hatch. All for $36,000. Now that most of the initial reviews are in, does the Focus RS match the hype? How’s this for an automotive cliche: There’s only one way to find out…

It’s almost easy to feel bad for the position Ford found itself in with the RS. Though RS variants have been in Europe for some time now, there has never been one offered in the U.S. The moment that news was released, the bar was immediately set substantially higher than it has been for its predecessors. Match that with the prolific hype generated and it’s easy to be skeptical that a car could meet so many expectations.

Here’s the amazing thing: It has.

Subaru has been at the four wheel drive game longer, but Ford is hardly making rookie mistakes in its first big entry to the AWD performance hatch market. In truth, the RS features one of the most dynamic traction control systems yet made. Using true torque vectoring (as opposed to brake vectoring we’ve seen on other AWD cars), the RS can send 70 percent of power to the rear wheels when needed, and even 100 percent of torque to a single wheel. Short story: no matter where there is grip, the Focus RS will find it.

Ford has also done a brilliant job of making each drive mode very distinct. Comfort allows for somewhat surprising amounts of body roll, but stiffen things up to sport and flatter cornering is a non-issue. Track takes things a notch further, putting traction control into its own sport mode, allowing for more slip and overall driver control. Then, of course, there’s the internet-dominating drift mode. Essentially, it recalibrates the steering, AWD system, torque vectoring and traction control (duh) to allow for sustained drifts with ease. Seriously, even the most ham fisted drivers can look a little bit like Ken Block. For days.

So it’s comfortable for daily driving, hugely practical, very capable on track and can be a complete lunatic when you want it to be. Any complains to go along with that fairly staggering combination? The interior is pretty much the same you get with a base Focus. Which, considering this is a $36k car that does 0-60 in 4.7 seconds, is fairly easy to forgive. Yes, the U.S.-spec seats aren’t awesome (Euros get much more hardcore Recaro buckets. Sad face). But absolutely do not let that dissuade you from one of the greatest driver’s cars available today.

Don’t just take our word for it. Check out a few of our favorite video reviews so far: