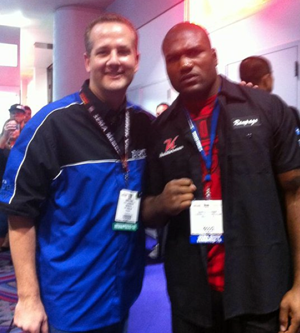 This past November was crazy for Duke Networks and the Motorz TV crew at the 2010 SEMA Show. We covered several press events, filmed an entire episode for Motorz TV, and had the pleasure of covering the reveal event for the new K-Van A-Team van created by Kelderman Manufacturing for UFC fighter Quinton “Rampage” Jackson, presented by Zan Martin from Martin & Company Advertising.

The entire Motorz TV crew was involved in this effort, and if you watch the video closely, you’ll find all of us in the background, especially during the autograph signing. A huge thanks to Martin & Company for the opportunity, Rampage Jackson for his cooperation (and putting up with us LOL), and my crew which included Jason Gillmore, Mike Wilkes, Greg Erickson, Andrea Amaya, Mark Ponter, Michael Schuerlein, and Tom Swanson.

Covering a live event with so many people present was a challenge, involving multiple cameras and audio equipment. We all had a lot of fun though, and as you can see by watching the video below, there was a lot going on! I had fun editing this too, adding some A-Team military effects to it.

The highlight for all of us, of course, was meeting Rampage. Even though he had an upcoming UFC fight he was training for (which he won!), you wouldn’t have known it. He is a funny guy and was thrilled about his new ride that Kelderman Mfg. built for him.

If you haven’t checked Rampage out in his starring role as “B.A. Baracus” in the 2010 release of the A-Team movie, you should! It is awesome, and the new Mr. T kicked some serious butt! 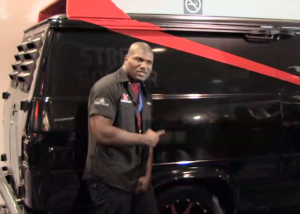