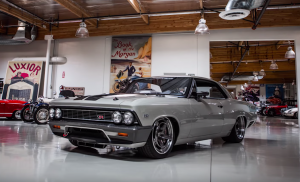 Recently, we discussed some of the worst, most overplayed modifications. Considering the wide array of aftermarket parts available, it’s not difficult to take a project car in the wrong direction. Those that have the right eye, money to burn and build plan, however, can have a very different result. From well over 1,000 horsepower beasts to an incredible resto-mod, here are three of our favorite muscle car builds.

Every. Single. Statistic. That’s what’s insane about the Shelby 1000. Absolutely everything. Not satisfied with the 5.8L supercharged V8 in the GT500? Here’s your solution. Using the same block, Shelby managed to nearly double the horsepower figure, now arriving at a staggering 1,200 hp. Though we imagine that’s pretty much uncontrollable in anything other than a straight line, this Snake still comes with adjustable, high-performance suspension and upgraded brakes. Best of all, that number is achieved on pump gas.

There is one downside: it isn’t exactly cheap. First you’ll need a GT500. Once that box is ticked, take your car to Shelby with a check for $154,995. Around $200,000 all-in for a Mustang is really, really pushing it, but in return you’ll have one of the fastest muscle cars on the planet. Not bad. Plus, even at idle it sounds like it wants to eat your children. That alone is worth the price of admission.

Let’s say you’re not a Ford fan but still want a pony times 1,000. One of our favorite tuners, Hennessey, has you covered. With the HPE1000 Camaro, this Bow Tie from hell drops 1,000 hp to the wheels. That’s good for 0-60 mph in 3.1 seconds and a 10.4 second 1/4 mile pass at 136 mph. The modification list is extensive but highlights include a 2.9L supercharger, forged pistons, custom HPE camshafts and stainless steel headers. Plus, you’ll receive a 1 year/12,000 mile warranty for easier sleep.

Pricing? Considering the options involved, that’s a question best left to your local Hennessey rep. But before anything begins, you’ll need a 2014-2015 Z/28, which go for $70,000. After hearing the sound from this animal, we’ve already started saving up. Seriously, it sounds like a slightly detuned Saturn V.

Our want for this dream build cannot be properly expressed. The premise sounds relatively simple: take a ’66 Chevelle and make it a ground based missile. Considering it makes 1,000 hp (ok, technically 980, but in Motorz math that’s 1,000), mission accomplished. Yet, the biblical powertrain is only a small part of where the 5,000 hours in this build went. A stripped interior with an art-deco feel to side exhaust tips and custom bodywork all combine to make the Recoil powerfully unique. We’re also pretty sure this blown LS could be heard from across state lines. In this case, that’s an incredibly good thing.