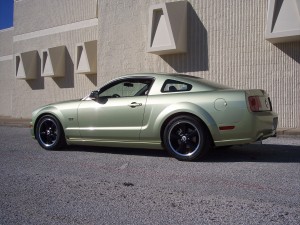 Not too long ago, we landed Covercraft Industries as a major sponsor here at Motorz. Around the same time, we decided to revamp our Ridez page, and up the ante a little for our dedicated viewers by offering up the chance to win a custom patterned WeatherShield HP cover in gray or taupe color ($245 to $644 value) with Motorz logo. All you have to do is submit a photo of your ride for our Ridez Page and the staff here selects a monthly winner!

December 2011 was the first month we had our new contest in effect – and we got a ton of entries!

Our staff went through all of your photos, and it was really tough to pick a winner as you all had some great vehicles.

After deliberating for some time, we decided on Jason Palmer of Euless, TX and his Legend Lime 2005 Ford Mustang GT!

Read on to check out his awesome ride!

Before we get into his long list of mods, Jason’s back story on his vehicle is a good one. Looking to replace an Audi A4 that was totaled during a storm – he had scoured the country looking for a Mustang that was “the one”. His search brought him to Portland, OR where he located a Legend Lime Mustang GT. After a few phone calls to a Lexus dealer, he purchased a one way ticket to Portland, and started a three day drive back to Texas! Three weeks after that long drive, Jason was back in his Mustang and drove cross country to see his Brother and his family in Maryland!

Jason is also extremely proud to say that he has installed every single modification on his vehicle – thanks to the help of Motorz!

Jason referenced Season 3 Episode 5 of our show to help with his suspension mods, and admitted he watched it several times. For his shift kit, he used Season 2 Episode 11, where we installed an aluminum drive shaft and short throw shifter in our Mustang project car. Finally, for help replacing his sway bar, Jason referenced Season 2 Episode 15 – when we installed Hellwig front and rear sway bars on a Ford Mustang.

Even though Jason uses his Mustang GT for road trips fairly often, he also uses his Legend Lime at the track where he is an instructor for high performance track events. He was nice enough to send along a video showing us some track time!

Jason admits though, that he’s no where near completing his ride and has plans to add stainless brake lines, track pads and disks and R-Compound tires for his track runs.

Congrats again to Jason for submitting his vehicle for Ridez and for winning the Motorz-branded car cover from Covercraft. To enter your ride for this month’s contest, click here.

Check out some more photos of Jason’s awesome ride! 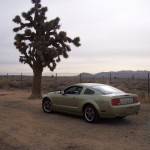 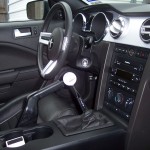 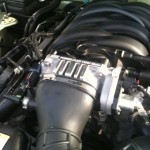 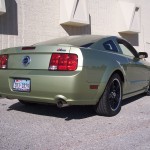 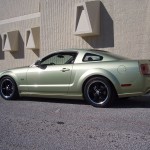