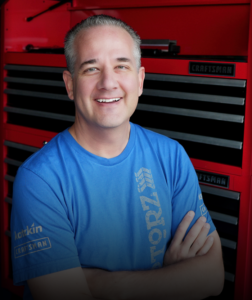 Chris Duke is the creator, executive producer and host of Motorz TV, a half hour syndicated television series available to over 100M TVHH in the U.S., plus iTunes, Roku, and more. He also reviews tools and gadgets on YouTube.

Chris is a true automotive enthusiast with more than 34 years of experience in hands-on vehicle customization and an 21 year veteran of the automotive industry. Previously he served as a magazine editor, as well as the host and co-writer for Auto Center, a web series produced for Mobil 1.

Introduced in 2008, Motorz is the fastest growing nationally televised Automotive Improvement® series of its kind. Unlike other automotive shows that skip important steps during commercial breaks, use expensive tools, or perform feats that would be impossible for the average viewer, Motorz shows viewers how to confidently and properly maintain a vehicle and install aftermarket accessories with simple step-by-step instructions in a home garage environment.

In each episode, Duke shows viewers what tools to use, and how and why to use them. He also offers advice regarding potential challenges along the way, and always provides information on important safety precautions. Whether it’s installing bolt-on products, wiring electronics, rebuilding an engine, or detailing the vehicle, Motorz empowers viewers by offering a realistic look at what lies beneath the installation instructions. Motorz reaches viewers in the U.S. via cable, broadcast television, and more via Internet distribution, video-on-demand and mobile access including iTunes, Roku, and more.

In 2012, Chris Duke was selected to host and co-write the eHow Auto Center series. Produced by Demand Media and sponsored by Mobil 1, the online series offers tips and how-to instructions on auto repair and maintenance projects to help improve longevity, performance, safety and fuel economy for new and used gas-powered, electric or hybrid vehicles.