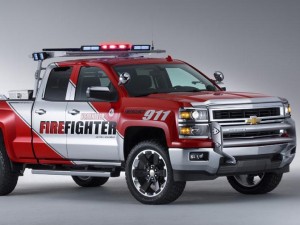 With the legendary Specialty Equipment Market Association (SEMA) just around the corner, the aftermarket industry is beginning to showcase some seriously impressive kit. Occasionally, major auto manufacturers will prepare modified versions of factory vehicles. When it comes to these cars, there are special editions and then there are special editions. Chevy recently revealed two well-prepared Silverado pickups for SEMA and trust us, they’re the latter.

The first truck, called the Silverado Z71 Volunteer Firefighter, exists for one reason: to pay tribute to the service and sacrifice of all first responders. As the name implies, this truck is made to offer firefighters all the tools of the trade. While it began life as a Double Cab with Z71 package, there have been dramatic changes to its utility. Among a host of upgrades, the pickup features: 22-inch wheels, an emergency roof light bar with LED perimeter lighting, 4-inch chrome-assist steps, hood protector, siren, mounting hardware for fire extinguishers and a host of other modifications. 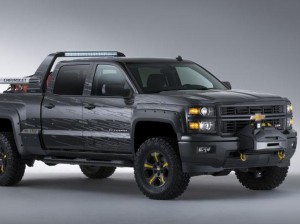 Taking a slightly more sinister turn, the second SEMA-prepared Silverado is called the Black Ops concept. Basically, if the apocalypse happened tomorrow, this is the truck you’d want to have. As modified as the Firefighter-spec truck is, this takes it to an entirely new level. Underneath pitch black paint, this Crew Cab 4×4 is ready for virtually any survival situation. It begins with lower-body armor, a lockable bed-mounted truck vault storage unit, a solar-power pack, a pair of gas masks, gloves, a first-aid kit, rope and folding shovel.

But wait, there’s much more. Above the surface, you’ll find a generator, fuel and water cans and a crate stocked with food. Have a meal in mind to have with you when the end-of-days comes around? So does Chevy. It’s filled with Twinkies. Either way you go, first response or last line of defense, these are two incredibly capable trucks.